Posted on August 9, 2019 by Uncomely and Broken

Posted on August 9, 2019 by Uncomely and Broken

Various Notices on the Sewanee Production of Antigone of 1894

“Loftier than this devotion to the legitimate, semi-legitimate, and wholly illegitimate drama, is the success on the stage of the students of the Greek department, who, under the direction of Vice Chancellor Wiggins, have won an enviable reputation by their presentations of the masterpieces of ancient tragedy and comedy. Every summer they put a Greek play on the boards, now a comedy of Aristophanes, that makes the audience hold its sides with laughter; now a solemn and moving tragedy of Sophocles or Euripides that brings tears to the eyes of seasoned veterans. The performance of the “Antigone” last summer elicited great enthusiasm, not only at Sewanee, where it was presented before a large and distinguished audience, but also at Nashville, where two brilliant performances were given in the opera house. So great is the interest aroused by this successful reproduction of the spirit of old Greek life as exhibited in the Greek drama, that the Greek play may be said to be the leading feature of a Sewanee commencement—a function which lasts several days, a performance at which there is no vacant seat, and a marvel of staging considering the primitive surroundings of the University.” 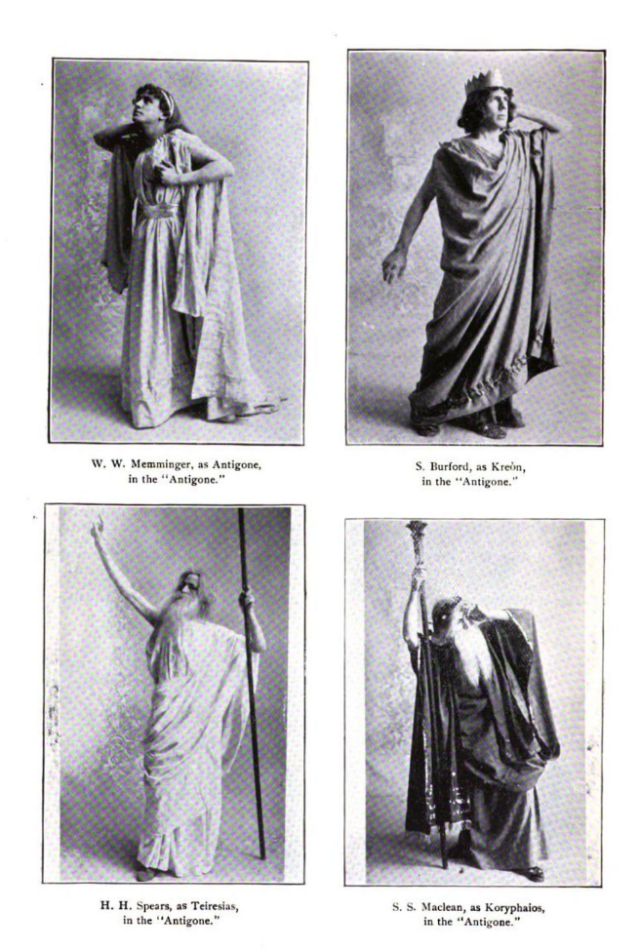 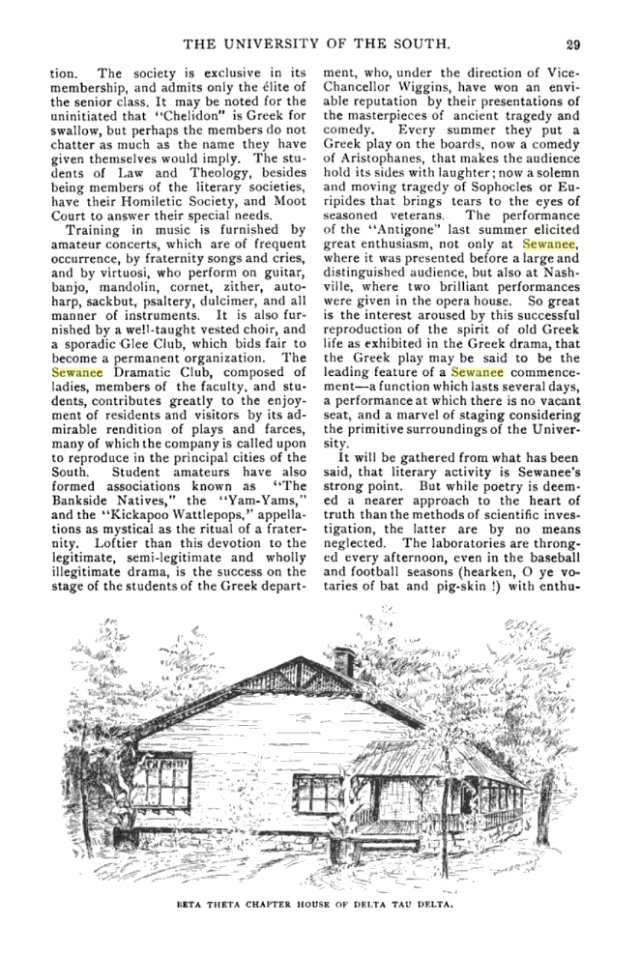 Posted on August 7, 2019 by Uncomely and Broken

That some of Abbo’s Alley was laid out during WWII by German POWs is something I’ve often heard, but seen little documentary evidence. Below is what I’ve found.

Thanks very much for Alan Cheuse’s refreshing article on Sewanee (Travel, May 6). As a student I was one of Abbo Martin’s ”assistants” in the development of Abbo’s Alley (now known as the Abbot Cotten Martin Ravine Gardens). In one afternoon in 1951 two of us, under Abbo’s watchful eye and the direction of his waving hickory walking stick, planted nearly 2,000 Dutch daffodil bulbs. It was especially gratifying to note that Mr. Cheuse singled out daffodils as one of the graces of the Alley.

Abbo’s assistants worked hard, at $2 per afternoon, to help him fulfill his vision. It was work that, in a way, transformed us and made us better. I never fail to go back to Abbo’s Alley on my visits to Sewanee. I planted part of my youth there with those bulbs, and dogwoods, and hemlocks. Abbo eased our labor by quoting Wordsworth to us if our spirits flagged. Or he led us off to some new task with ”As Plato says, ‘a change is as good as a rest.’ ” I never really knew whether Plato said that, but the idea helped.

During World War II Abbo was assigned three German prisoners from the nearby camp in Tullahoma. He later received letters from one of them, remembering his kindness. ”They had never had a milkshake until I bought them one at the Union,” Abbo told us. As he left them working by themselves, while he drove up to the Union, he would admonish them: ”Nicht gangen away, oder ich gechasse mit bloodhounds.” They smiled at his fractured German, and promised to hang around.

Richard Allin writes the ”Our Town” column five days a week for The Arkansas Gazette.

No doubt the poem Abbo recited was “I Wandered Lonely as a Cloud”:

I wandered lonely as a cloud
That floats on high o’er vales and hills,
When all at once I saw a crowd,
A host, of golden daffodils;
Beside the lake, beneath the trees,
Fluttering and dancing in the breeze.
Continuous as the stars that shine
And twinkle on the milky way,
They stretched in never-ending line
Along the margin of a bay:
Ten thousand saw I at a glance,
Tossing their heads in sprightly dance.
The waves beside them danced; but they
Out-did the sparkling waves in glee:
A poet could not but be gay,
In such a jocund company:
I gazed—and gazed—but little thought
What wealth the show to me had brought:
For oft, when on my couch I lie
In vacant or in pensive mood,
They flash upon that inward eye
Which is the bliss of solitude;
And then my heart with pleasure fills,
And dances with the daffodils. 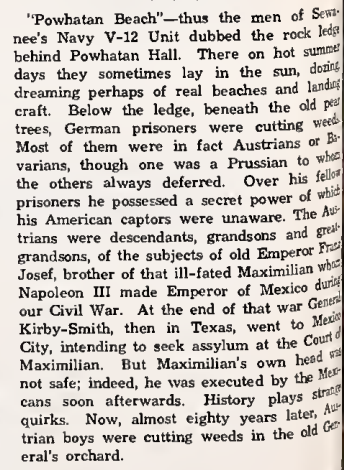 Posted on August 5, 2019 by Uncomely and Broken

Mind you, an edition of this work won a goddam Nobel Prize for Literature in 1902

In the mighty vortex of the world’s history, which inexorably crushes all peoples that are not as hard and as flexible as steel, such a nation could not permanently maintain itself ; with reason the Celts of the continent suffered the same fate at the hands of the Romans, as their kinsmen in Ireland suffer down to our own day at the hands of the Saxons — the fate of becoming merged as a leaven of future development in a politically superior nationality. On the eve of parting from this remarkable nation we may be allowed to call attention to the fact, that in the accounts of the ancients as to the Celts on the Loire and Seine we find almost every one of the characteristic traits which we are accustomed to recognize as marking the Irish. Every feature reappears : the laziness in the culture of the fields ; the delight in tippling and brawling ; the ostentation… ; the language full of comparisons and hyperboles, of allusions and quaint turns; the droll humour … ; the hearty delight in singing and reciting the deeds of past ages, and the most decided talent for rhetoric and poetry ; the curiosity … and the extravagant credulity which acted on such accounts, for which reason in the better regulated cantons travellers were prohibited on pain of severe punishment from communicating unauthenticated reports to others than the public magistrates ; the childlike piety, which sees in the priest a father and asks him for his advice in all things; the unsurpassed fervour of national feeling, and the closeness with which those who are fellow-countrymen cling together almost like one family in opposition to the stranger; the inclination to rise in revolt under the first chance leader that presents himself and to form bands, but at the same time the utter incapacity to preserve a self-reliant courage equally remote from presumption and from pusillanimity, to perceive the right time for waiting and for striking, to attain or even barely to tolerate any organization, any sort of fixed military or political discipline. It is, and remains, at all times and places the same indolent and poetical, irresolute and fervid, inquisitive, credulous, amiable, clever, but — in a political point of view — thoroughly useless nation ; and therefore its fate has been always and everywhere the same.

These images are take from the recently-recovered Fauquier Book of Hours, on which my friend and colleague Greg Clark is an expert, as discussed in the video below. The scene illustrated is from Psalm 6, the opening of which is here (you can listen to Monteverdi’s setting as you read!)

O Lord, rebuke me not in thy indignation, nor chastise me in thy wrath.

This is just a page on which I intend to stick things I find out about Tim’s Ford lake.