Who’s ready for another marginal mystery?

OK, so my posts–here, here, and here–about the mysterious notations on the flyleaf of an 18th century edition of Cicero’s works have led to discussions with various and sundry folks that have been a great deal of fun.

So, here’s another! Here is the title page of another book in my possession, an edition of Tacitus’s Works, published in Trajecti Batavorum (= Utrecht, the Netherlands) by Jacob Poolsom and Johannes Visch. You can see the date is given as C I Ↄ   I Ↄ  C C  X X I = MDCCXXI = 1721. 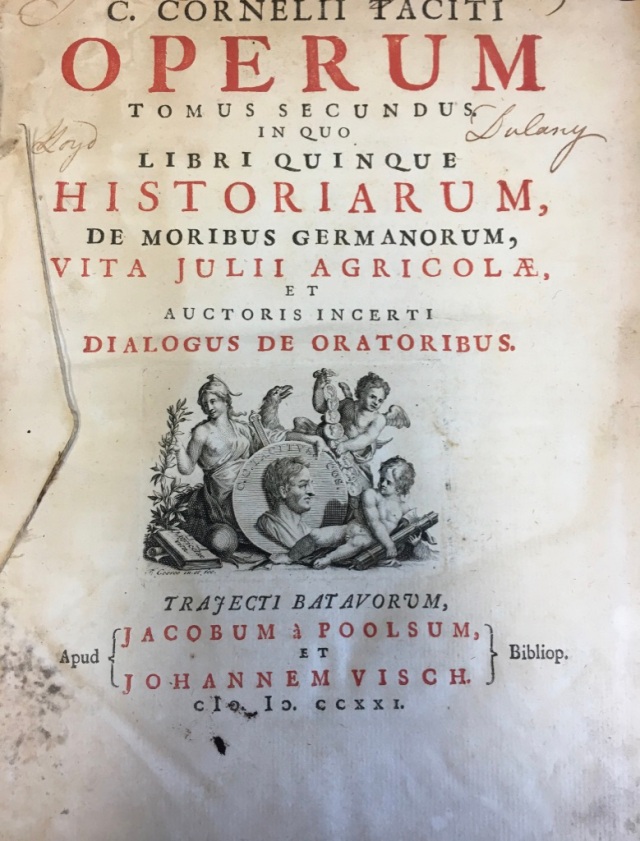 What’s interesting is the name of the owner, written on either side of TOMUS SECUNDUS, etc., which appears to be “Lloyd Dulany.” 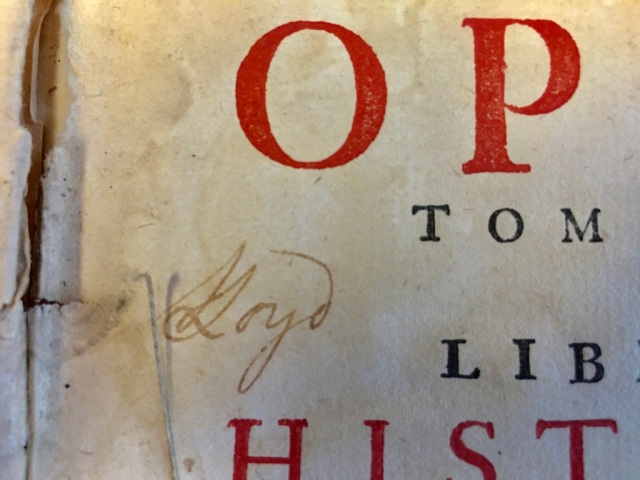 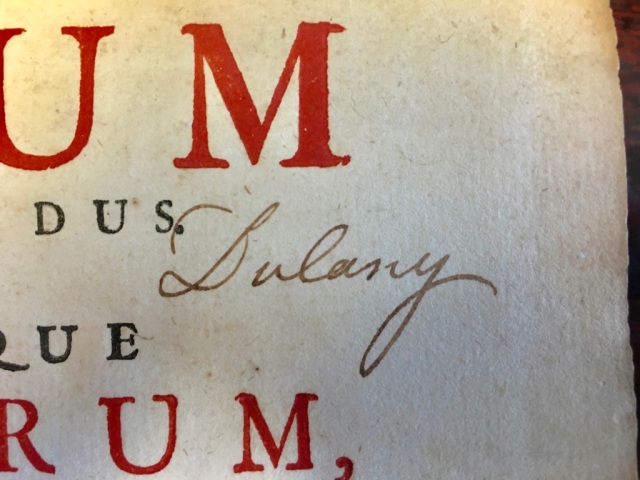 So, who is “Lloyd Dulany”? You know me, friends– I just had to know.

Turns out that, if we were living in London or Baltimore in the year of Our Lord Seventeen Hundred and Eight Two, we would be intimately familiar with the name of Lloyd Dulany.

A member of a prominent Loyalist family, Dulany was killed in a duel in London by a certain Bennet Allen, an 18th century Anglican cleric of unsavory reputation (the guy wrote a poem called “Modern Chastity; or the Agreeable Rape” and a pamphlet called “A Modest Apology for Adultery”). The subsequent trial was evidently quite the sensation.

According to the Wikipedia article about Allen, here’s what happened:

In subsequent years Allen contributed largely to the ‘Morning Post’ In an anonymous article, called ‘Characters of Principal Men of the [American] Rebellion,’ which appeared there on 29 June 1779, he vehemently attacked the character of (American rebel) Daniel Dulany, formerly secretary of Maryland and a parishioner at St. Anne’s who had publicly chastised Allen in the street and a series of articles in the ‘Maryland Gazette’ (to which Allen had disingenuously replied as “Bystander”).[4] On 1 July the ‘Morning Post’ withdrew the charges against Dulany, but Lloyd Dulany, a brother of the subject of the alleged libel, publicly challenged its anonymous author in the newspaper. Allen did not appear declare himself the article’s writer immediately, but after a long interval a duel was arranged. On 18 June 1782, Dulany was killed in the duel. Allen and his second, Robert Morris, surrendered themselves on 5 July of the same year, to answer a charge of murder at the Old Bailey sessions. After a trial, which attracted general public attention, Allen, in spite of his plea for benefit of clergy and the evidence as to his character adduced by Lords Bateman, Mountnorris, and many fashionable ladies, was convicted of manslaughter (but Morris acquitted), and sentenced to a fine of one shilling and six months’ imprisonment.[5]

(I don’t think Wikipedia is correct in calling Daniel Dulany a rebel, BTW)

I don’t know how to feel about this. Allen seems like a jerk, so I guess I’m on Dulany’s side? But that’s only because, by some weird twist of fate, I happen to own his copy of Tacitus.

I note that it’s got a bookplate in the front from the Library of the Protestant Episcopal Divinity School in Philadelphia, so it’s from some church connection that it must have come to me. Anyway, that divinity school merged with another in 1974 and is gone now.

I am a classicist in Sewanee, Tennessee.
View all posts by Uncomely and Broken →
This entry was posted in Books, Classics, England. Bookmark the permalink.