Little mysteries in an old edition of Cicero

Posted on February 18, 2019 by Uncomely and Broken

How this book came into my possession, I really can’t say, but it’s probably the oldest one I own, a copy of select orations of Cicero (together with Asconius’ commentary) as well as De Senectute and De Amicitia, originally edited by Charles de Mérouville, S. J., and printed in London in 1750. In fact, this edition is a British reprint of the original French edition in the Delphin Classics series produced ad usum Delphini, for the use of the Grand Dauphin, Louis (son of Louis XIV and father of Louis XV). My copy is the seventh edition of this volume; you can find the twelfth edition (1780) on Google Books.

The book’s not in great condition–the pages are very brittle, the binding almost entirely undone, but it’s a charming old thing.

And it’s full of mysteries. To wit, from the flyleaf:

Here’s how I transcribe it:

This Book was borrowed by the

subscriber in the Year 1789 of Mr. Samuel

Welles Junior—Who then informed me

that it was the property of Mr. Elijah Smith.

himself & left his debts unpaid, This Book

was taken by Mr. Gideon Hale for a just &

owed him  & was presented by the said Gideon

Hale to Elias Hale whose property it

Evidently the book was valued at 10 shillings (Pretium 10/ ) which, according to the UK National Archives currency converter, means its present-day value is £38.38 ($49.72).

But who are the people in this sordid tale? Who is the ne’er-do-well Elijah Smith, classically educated and once wealthy enough to own an expensive volume of Cicero until “abscond[ing] himself” and pissing off his friend? Who are the self-righteous brothers Elias and Gideon Hale, who believe it is their divine right to just take their suffering buddy’s book? And what about the figures who lurk on the fringes, Samuel Welles Junior, whose only involvement is borrowing a volume of Cicero, or Septimius Huntington, who may be no more than a later owner of the book just as I am? They’re none of them mentioned in the Dictionary of National Biography, as I had hoped.

Furthermore, on pp. 444 & 445–right in the middle of the Second Philippic, someone at some point has pressed a leaf. 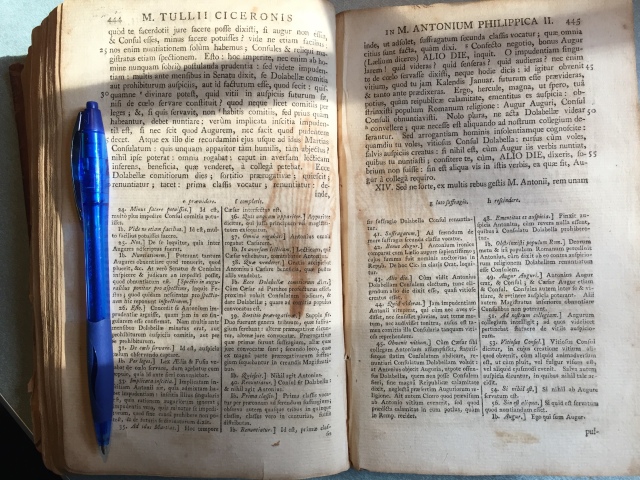 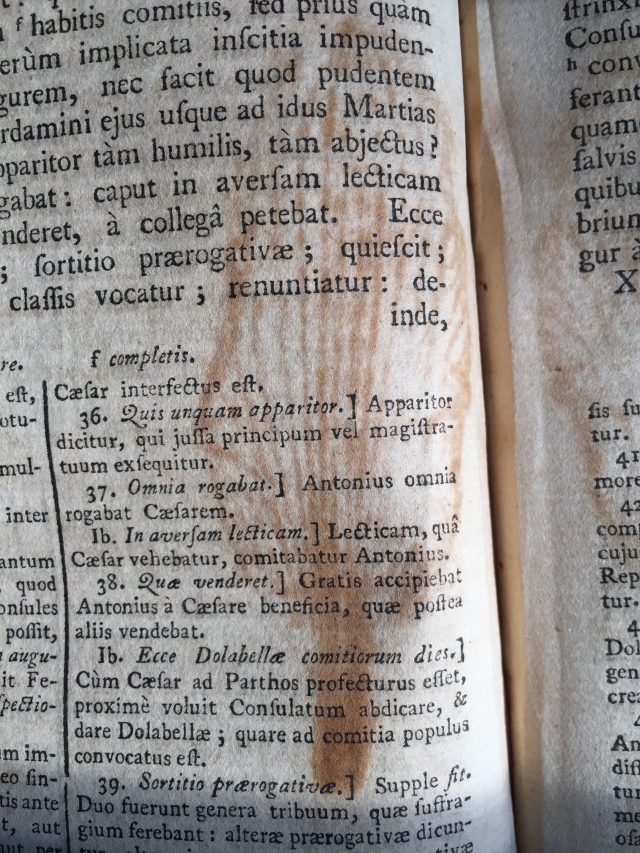 I wrote to my friend Ken Smith, in Sewanee’s Forestry department, to ask for his opinion. He sent the picture around to some colleagues, and wrote back, “The panel has decided….. Somebody strolling by picked an orchid of some kind.” Who or when is hard to say, but I like to think of Elijah Smith sitting in a field somewhere one spring, more attentive to the flowers around him than his studies or to the bills and obligations he has piling up. He sighs, picks an orchid, and absconds. 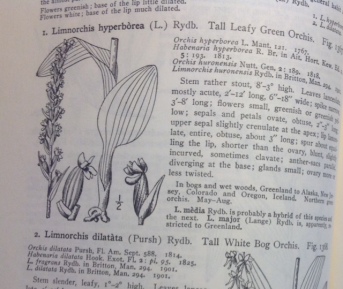 I am a classicist in Sewanee, Tennessee.
View all posts by Uncomely and Broken →
This entry was posted in Classics, Education, England, Italy, Language & Etymology, Rome, Sewanee, Time, Trees & Flowers, Uncategorized. Bookmark the permalink.

3 Responses to Little mysteries in an old edition of Cicero