Busy days in Trastevere! Arrived in time for the passagietta, and an open air screening of Grand Budapest Hotel in Piazza Cosimato, part of the local cinemal festival that’s been going on every night all summer. IN a few day’s time, I will see crowds of people watching an outdoor movie, none more lively than the screening of Disney’s Hercules. 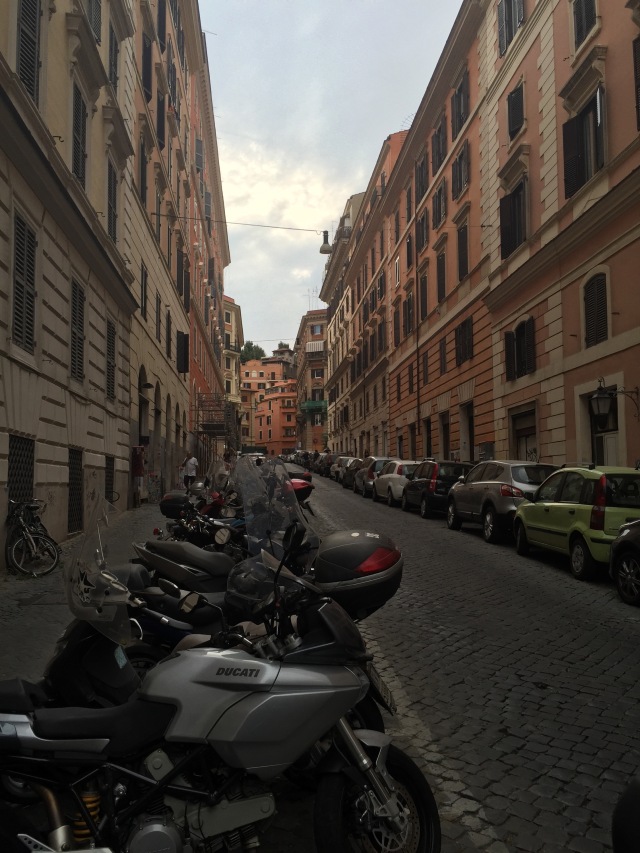 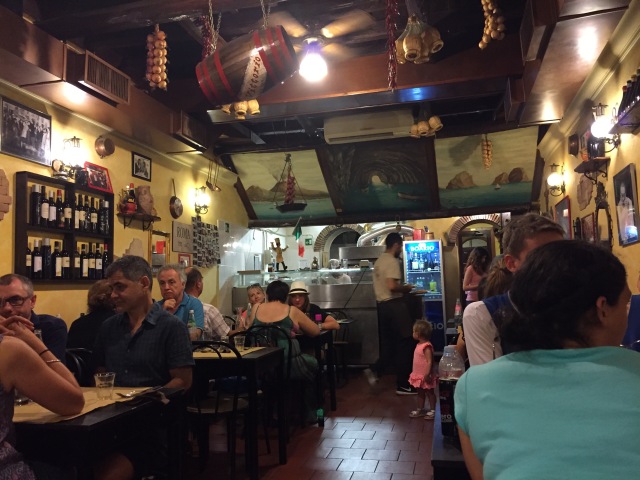 The next day, there’s a protest in front of the Ministerio Della Istrizione Pubblica, offering as much of a theatrical performance as anything you might seen on stage. (I had a video of this, but alas, can’t find it!). Then dinner with my old student and now MBA Latin teacher extraordinaire, Sarah Ellery! News exchanged over Ossobucco at the Cafe Baylon, named for a saint who himself liked good food and juicy gossip, according to the menu. A former Centrista, she has many great ideas about what Sewanee students might want to see and do on a summer program. 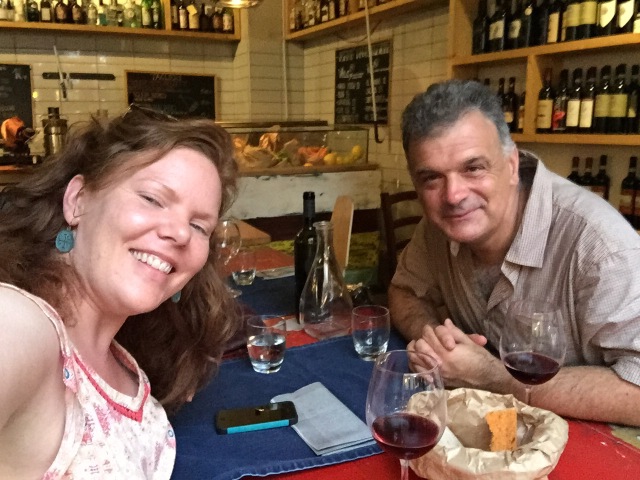 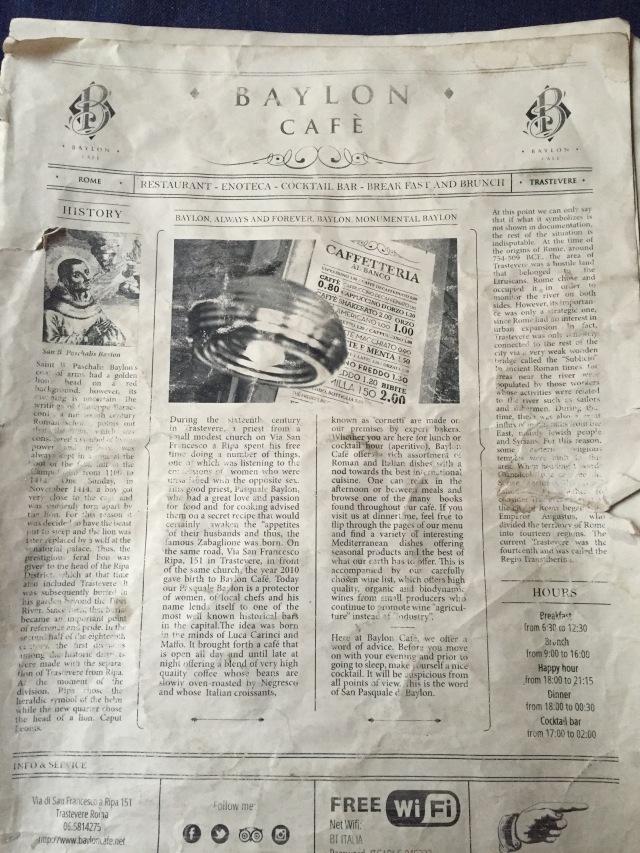 In the day to come, I have will wander around the churches of the Rione, always finding curiosities; for instance, in S. Francesco da Ripa, the famous Bernini statue of Bl. Ludovica Albertoni in ecstasy, somewhat undercut by the winged putti heads hovering above her from the frame above. In Santa Maria dell’ Orto, a Renaissance church that is now home to Rome’s Japanese Catholics, there is an icon of Guiliano Nakaura, a Jesuit martyr. In earlier times, this church was supported by various guilds, particularly millers, butchers, and poulterers (who even donated a splendid wooden turkey, in commemoration of the New World bird’s arrival to Rome). 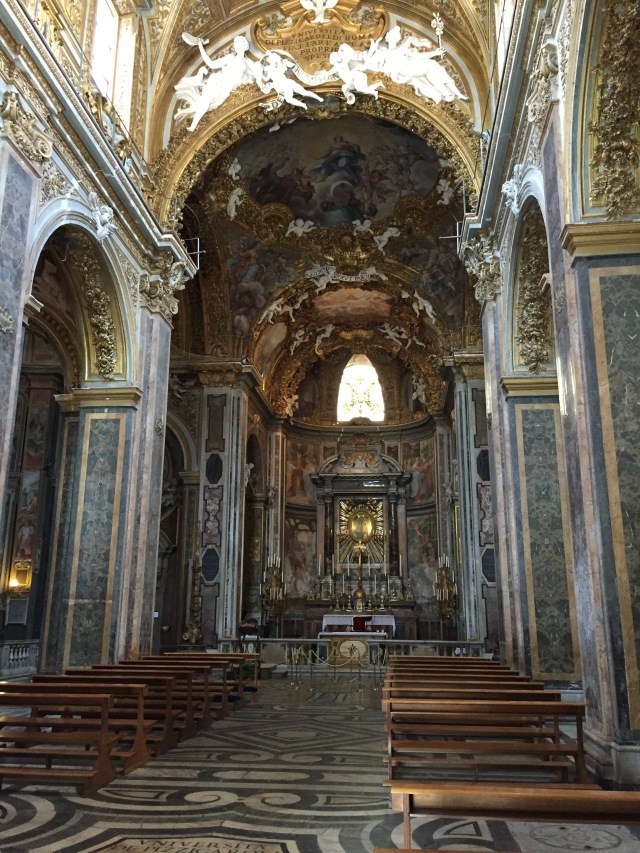 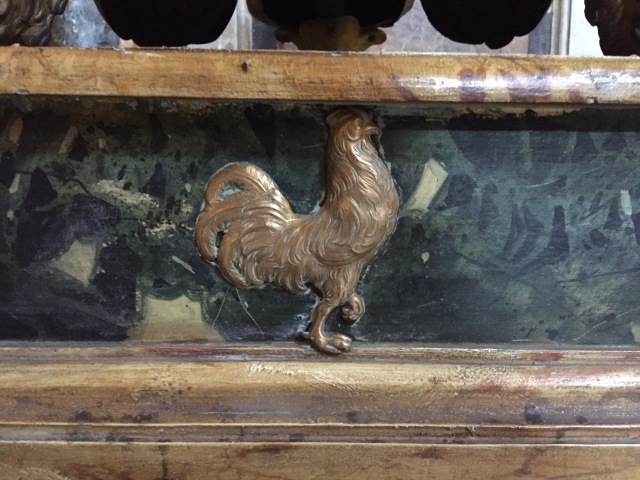 Of course, my favorite church is Santa Maria in Trastevere, wise origins lie in the third and fourth century. Outside, another festival is taking place.   Inside, you can see the splendid columns that come from the Baths of Caracalla, arranged a little inharmoniously, so as to point to their triumph over the pagan world. My friend Lora, who met me here, says that the round marbles pieces in the floor are slices of other pagan columns, according to one theory.  The images of the the saints have lots and lots of hand-written petitions at their feet, as does the picture of Pope John Paul II. 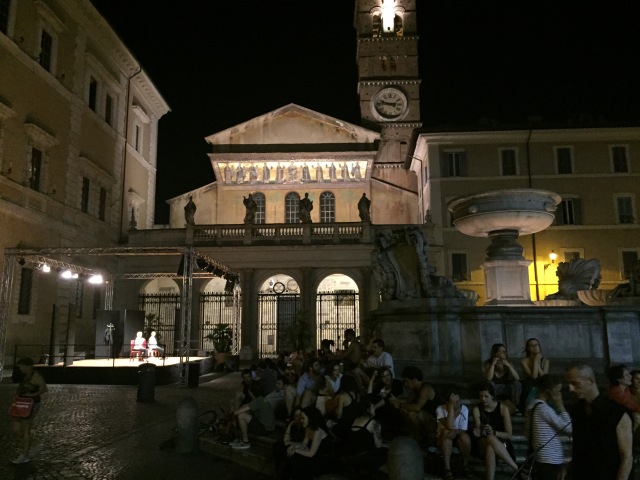 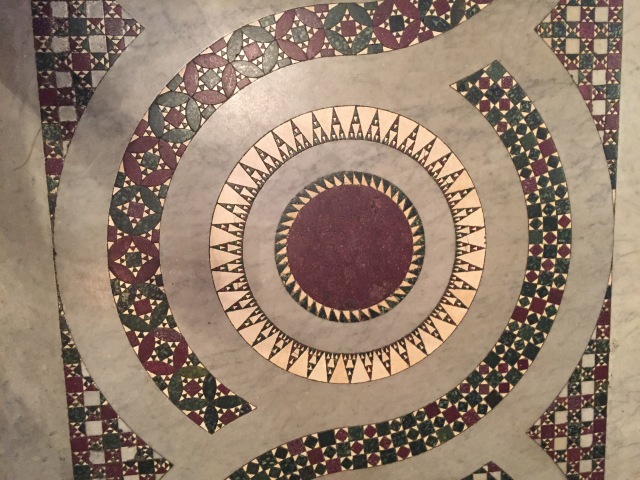 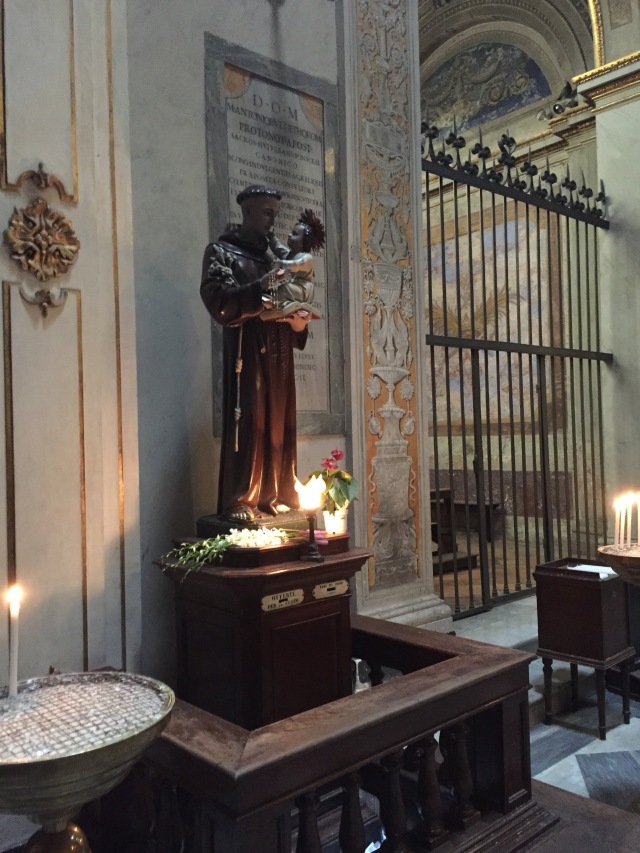 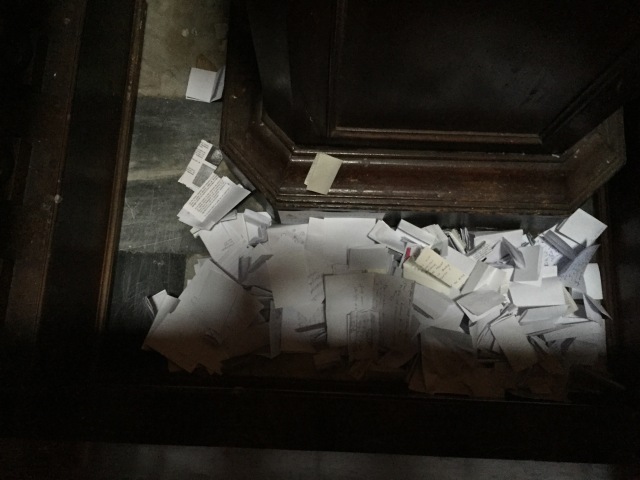 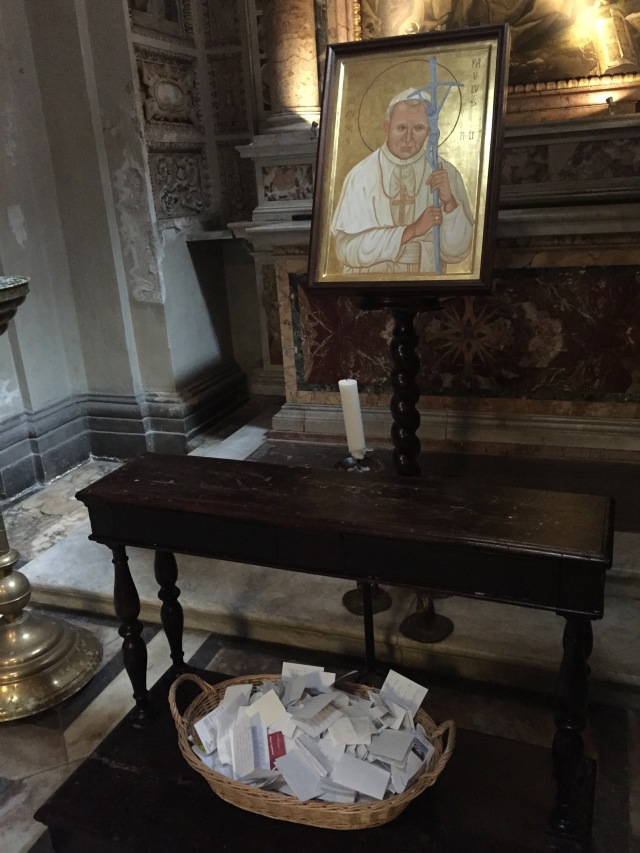 The portico of SM in Trastevere features a number of ancient inscriptions, pagan and palaeo-Christian from the region. Some favorites: 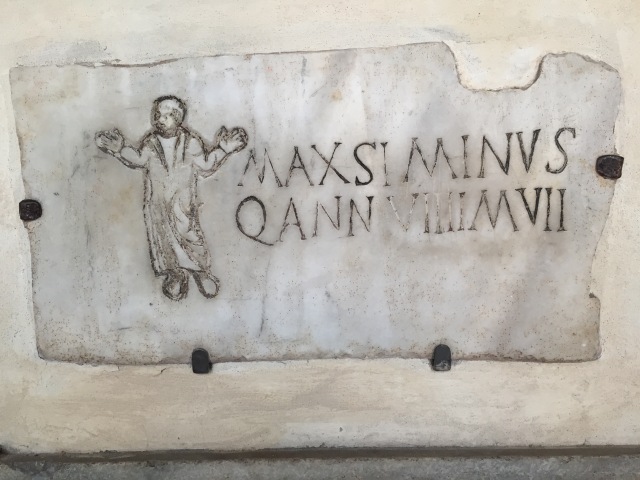 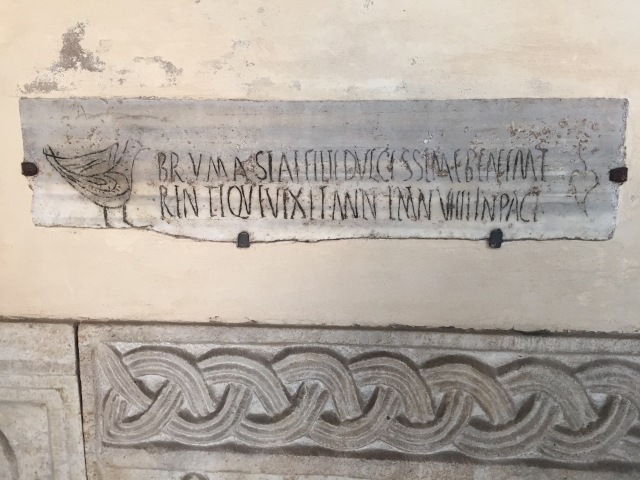 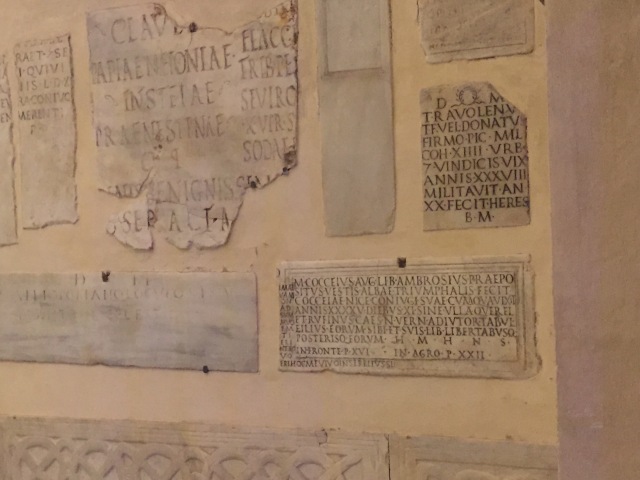 Lora and I went out for dinner to a nearby trattoria, the Cave Canem, where we talked about what she’s working on at the American Academy, the catalogue for the Cettamura exhibit next year in Siena, and of course the good old days in Chapel Hill.That night, the Trastevere Cinema Festival has a treat. “Cinema Paradiso,” with a talk beforehand by the director, Giuseppe Tornatore! 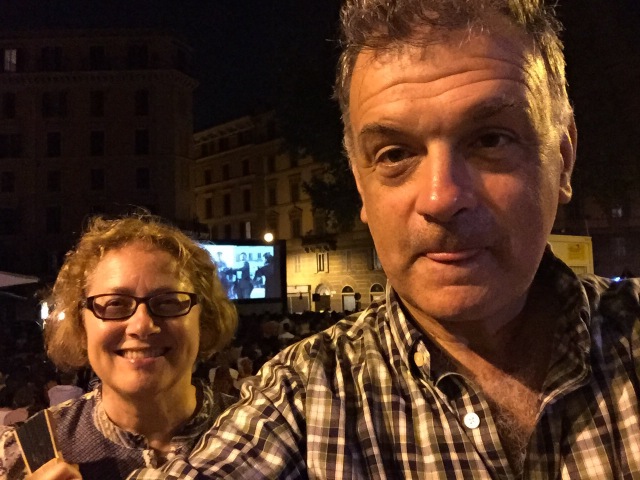 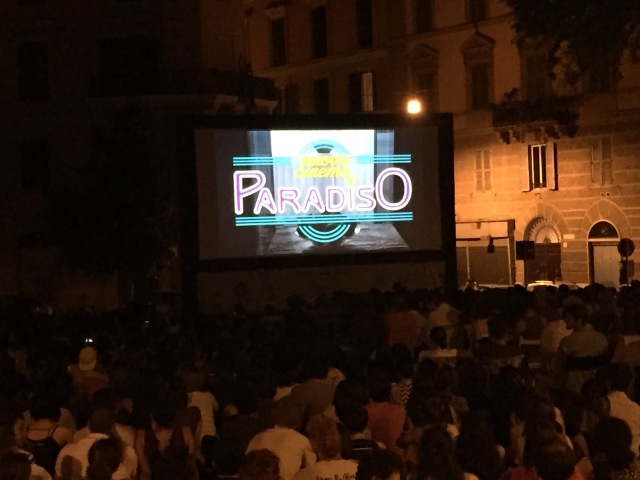 Sunday morning I must leave, but not before visiting the Porto Portese outdoor market, arranged for as far as the eye can see with tables full of clothing and bric-a-brac just beyond the old Roman archway. You see all sorts here—some nuns are haggling, expertly I might add, and there’s a woman who’s walking through with a bullhorn that she occasionally pulls out. I thought she might be part of a political protest, but no, she’s just denouncing some of the vendors whom she feels have ripped her off. The other sellers agree that, indeed, that guy is corrupt and very much unlike themsleves. The flea-market is the perfect ending to a perfect visit. Ciao Trastevere! 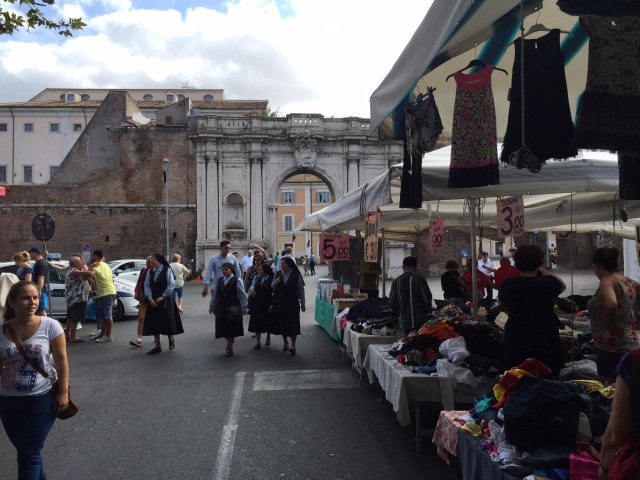 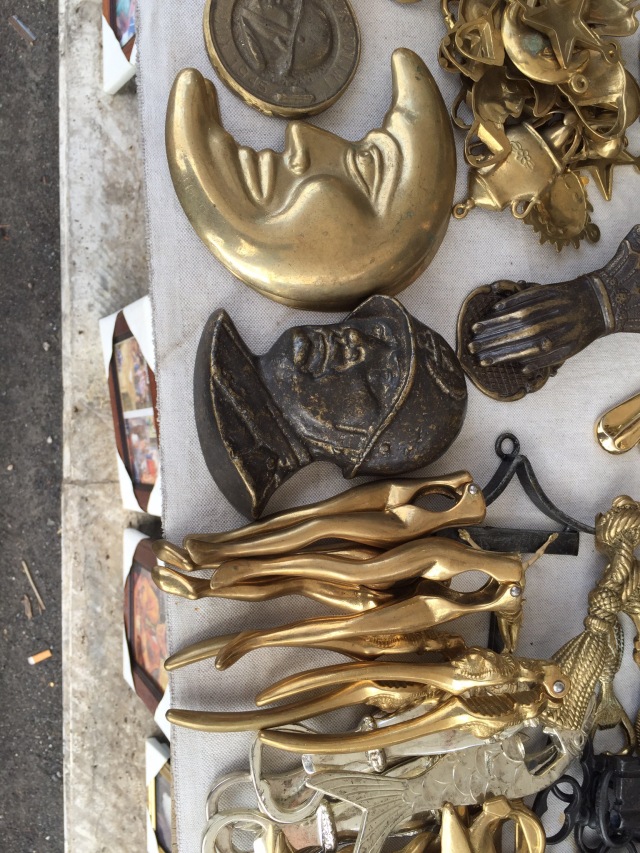 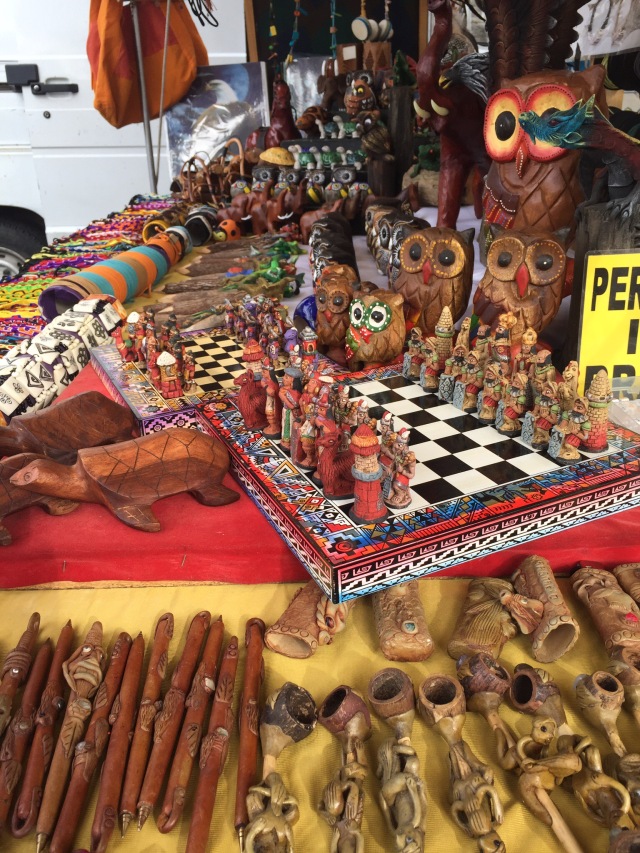