Some Jars in Tennessee

Posted on February 7, 2012 by Uncomely and Broken

In the woods behind my house there is a bunch of junk.  Railroad ties, rusty oil drums, the top of a washing machine with an attached wringer, et cetera, all of it old, haphazardly deposited, and overgrown with moss.  My neighbor Barbara grew up on this street and she tells me that, back in the day, all that was here was a dirt road.  There wasn’t any regular trash pick-up, so it made sense with stuff you didn’t want anymore just to haul it out to some spot far away from the house and leave it there.

So, yes, there is lots of old crap in the woods but you could also say that there’s an unexplored archeological site there, too.  Sometimes, when I am taking the dog for a walk out back, I stop and pick things up.  The kids have taken to doing the same.  Inevitably it is the dirty but not yet broken old glass bottles and jars that attract our attention.  And just as inevitably, I end up reciting some stanzas of Wallace Stevens in the meantime, though the boys have refrained from doing the same so far.

The stanza comes from Stevens’ poem, “Anecdote of the Jar,” reproduced below, which some of you may know.  Published in 1919, the poem is a classic of modernism, and is defiantly at odds with traditional literary aesthetics.  In a sort of ironic commentary on Keats’ “Ode on a Grecian Urn” (written in 1819), Stevens here questions the Romantic assertion that “beauty is truth, truth beauty.”   Maybe a jar placed in the “slovenly wilderness” of Tennessee is every bit as good as the “Attic shape” found in “Tempe or the dales of Arcady.”

Now, I love the Classics without a doubt, but I really despise cultural snobbery.  Much as I admire “Ode on a Grecian Urn,” sometimes I find it just a little too breathlessly pedantic.  The nice thing, though, is I don’t have to choose.  Hurray for you, “thou still unravish’d bride of quietness,” but hurray, too, for Wallace Stevens.  Hurray for modern ideals of American beauty.  And hurray for jars in the woods of Tennessee!

Let me share a few pictures of glass bottles and jars that the boys and I have found in the woods in the past few weeks.  I am not making any special claims about the uniqueness of their design or the rareness of their types.  All I’m saying is that there they were, ready to be picked up, small reminders of the days when the wilderness behind the house seemed the right place to cast away the excess things of this world.  My bottles and jars are, each in their own way I think, “foster-children of Silence and slow Time.” 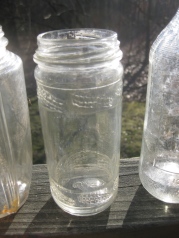 Anecdote of the Jar

I placed a jar in Tennessee,
And round it was, upon a hill.
It made the slovenly wilderness
Surround that hill.

The wilderness rose up to it,
And sprawled around, no longer wild.
The jar was round upon the ground
And tall and of a port in air.

It took dominion every where.
The jar was gray and bare.
It did not give of bird or bush,
Like nothing else in Tennessee.

I am a classicist in Sewanee, Tennessee.
View all posts by Uncomely and Broken →
This entry was posted in Poetry, Sewanee, The South. Bookmark the permalink.