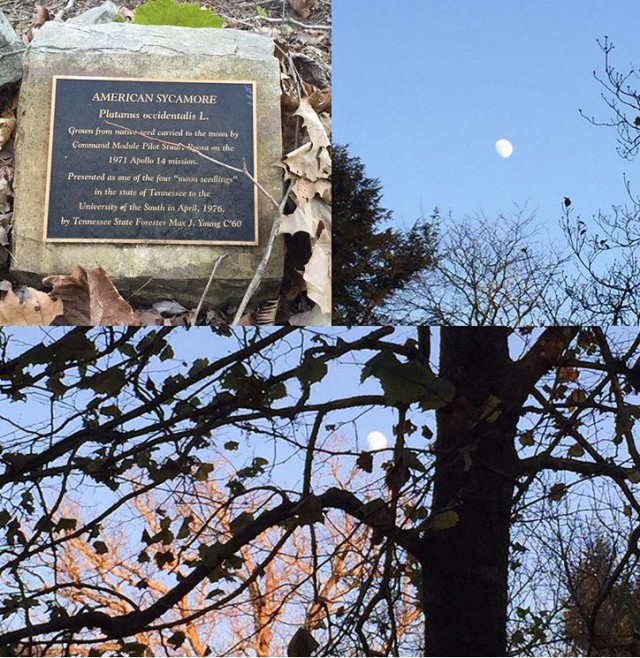 From the NASA wesbite:

Apollo 14 launched in the late afternoon of January 31, 1971 on what was to be our third trip to the lunar surface. Five days later Alan Shepard and Edgar Mitchell walked on the Moon while Stuart Roosa, a former U.S. Forest Service smoke jumper, orbited above in the command module. Packed in small containers in Roosa’s personal kit were hundreds of tree seeds, part of a joint NASA/USFS project. Upon return to Earth, the seeds were germinated by the Forest Service. Known as the “Moon Trees”, the resulting seedlings were planted throughout the United States (often as part of the nation’s bicentennial in 1976) and the world. They stand as a tribute to astronaut Roosa and the Apollo program.

One such “moon tree” is in Sewanee, and was the subject of a poem by a friend of mine, 30+ years ago.

It really happened, you know,
hundreds of seedlings to the moon and back in ’71.
Was it just to say they did,
a boondoggle,
the ultimate road trip,
a journey for the sake of the ride?
Or were they altered,
inexplicably changed in some fundamental way?

I’ve seen one of those moon trees.
You’d never know where it had been
unless someone told you.
A sycamore, it stands tall like all the ones around it,
no discernible difference.
Its branches stretch no higher than the others nearby.
Its leaves move from green to yellow before
discarding another year.
Its roots are securely earthbound.

Perhaps, though, when night falls and we sleep,
something internal and unseen awakens.
Just maybe there is a hidden monitoring
of the waxing and waning,
A deep knowing,
an undetected communing,
an unprecedented exhilaration of recognition
on nights when the full silver orb shines-
a yearning for a place visited and never forgotten.

Or perhaps the shift is perceptible only in
the darkest moments,
when the deep, black velvet curtain closes and
no light or comfort can be detected.
Then there may be a lonesome keening,
an inconsolable grief,
a loss lost on those who slumber.

If not, it would mean nothing to be a moon tree.

Ahh, my connection to Sewanee is entirely one of place. It was the domain that lured me there and then held me. It is still what calls me back. I believe I received an excellent education and certainly made lifelong friends. I do not believe the school itself to be any less flawed than any other institution and probably no more so either. Like any human construction it bears all the honorable intentions and also the less worthy.

The land itself, however, is remarkable and has so much to say. My years there, and my visits since, taught me to listen to more than humans and to be open to learning from all sources. Like Wendell Berry, I discovered the value of place. I wrote a lot poems simply for myself to try and capture those lessons.

The moon tree caught my imagination, particularly, because it had travelled further than any of us can really imagine yet was so rooted in such an unassuming place drawing so little notice. I think in a weird way, it helped me realize that a remarkable identity could be similarly held and did not rely on the accolades of others to create and sustain it.

How’s that for a Monday morning?

I am a classicist in Sewanee, Tennessee.
View all posts by Uncomely and Broken →
This entry was posted in Astronomical, Poetry, Sewanee, Time, Trees & Flowers. Bookmark the permalink.