“Gassed”: My Thoughts and Another’s, Unknown

Posted on November 11, 2018 by Uncomely and Broken 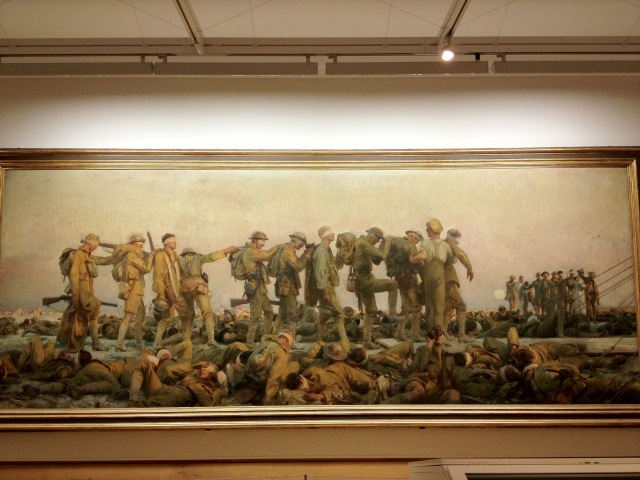 John Singer Sargent’s Gassed (1919)– I’ve seen it twice, last fall at the Frist’s WWI & American Art exhibit and, more memorably, in 2012 at the Imperial War Museum in London. The Olympics were on, and service men and women were being allowed into many of the events for free, so you saw lots of them in the city that summer. One guy in uniform at the IWM I particularly recall, because he stood in front of this painting for quite a while. I thought of that moment today, on the anniversary of the end of the Great War.

Just after the war, Sargent had been commissioned to inaugurate the Hall of Remembrance at the IWM with a work on the theme of the Anglo-American alliance. He chose instead, however, to depict the survivors of a mustard gas attack which he had himself seen in France. Rodin’s The Burghers of Calais (1889) was certainly in Sargent’s mind as he made this , as well as Pieter Bruegel’s The Blind Leading the Blind (1658). Naturally, I thought of Wilfrid Owen’s Dulce et Decorum Est from 1917,

Men marched asleep. Many had lost their boots,
But limped on, blood-shod. All went lame; all blind;
Drunk with fatigue; deaf even to the hoots
Of gas-shells dropping softly behind.

Sargent’s painting captures the horror of Owens’ poem, as well as the allegory in Bruegel. There’s much to look at, and one of the most interesting details is the off-duty soldiers in the background playing football– a grim reference, perhaps, to the quote attributed to Wellington that “the battle of Waterloo was won on the playing fields of Eton.” Gassed is an enormous work of art, 7.5 x 20 ft, and the soldier whom I saw that day at the IWM studied every inch of it. I was tempted to start up a conversation with him, but it seemed to me that he deserved to be alone with his thoughts and this masterpiece. Still, I would have liked to know what was going through his mind. 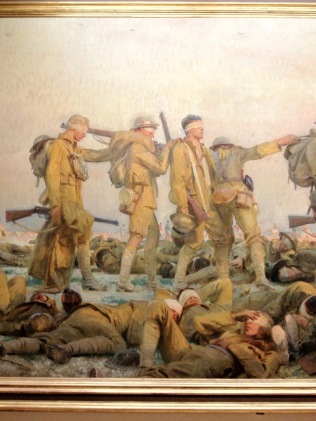 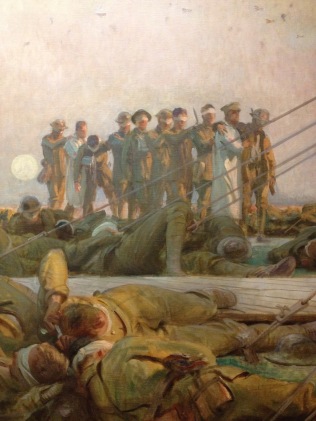 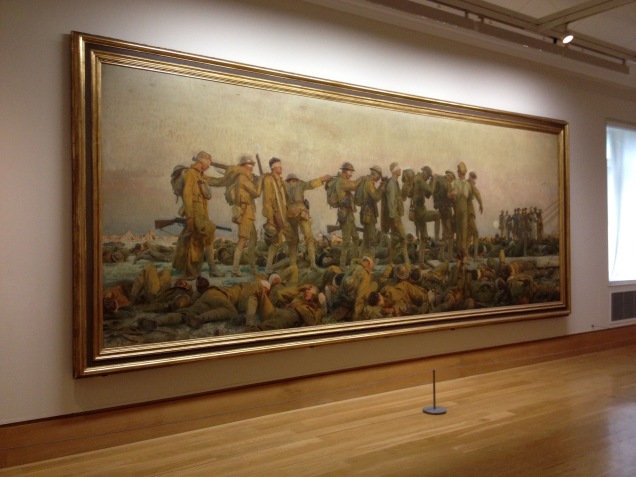 I am a classicist in Sewanee, Tennessee.
View all posts by Uncomely and Broken →
This entry was posted in Cemeteries & Funerals, Classics, England, Military, Poetry, Sports & Games, Time. Bookmark the permalink.