This weekend, I went with my friend Thomas to Louisville and, while there were other things on our itinerary about which I’ll write later, we went to the city’ famous Cave Hill Cemetery. Among the many remarkable gravestones we saw there was Muhammad Ali’s. I was not expecting the epitaph and, remembering the interview from which the words came and being able to hear his voice, I found it very moving. Like Elvis, Ali had been a real culture hero of my youth–his brash confidence seemed connected to his profound love of the world, which loved him back for it. Every match was an event that combined genuine athleticism and showmanship  with broader cultural matters of race and religion. When he left the sport, and the public eye, all the fun left too– what remained were bruisers whom I could barely bring myself to watch. Looking at Muhammad’s grave, I thought of the world that had passed and the world we are in. As discouraging as the times are, there is hope to be taken from his words and his example. He mixed willingness with happiness. Truly, he was the Greatest. 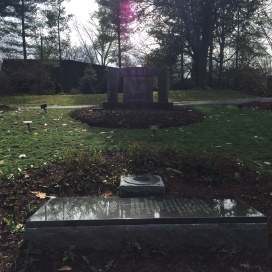 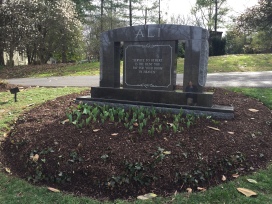 The epitaph is excerpted from an interview he gave with David Frost in 1972 (I note one significant change in the recipe–the omission of the word “deserving,” though even that seems a last bit of generosity on his part).

What would you like people to think about you when you’ve gone?

I’d like for them to say: He took a few cups of love. He took one tablespoon of patience, One teaspoon of generosity, One pint of kindness. He took one quart of laughter, One pinch of concern. And then, he mixed willingness with happiness. He added lots of faith, And he stirred it up well. Then he spread it over a span of a lifetime, And he served it to it to each and every deserving person he met.

I am a classicist in Sewanee, Tennessee.
View all posts by Uncomely and Broken →
This entry was posted in Cemeteries & Funerals, Race, Sports & Games, Statues & Monuments, Time, Uncategorized. Bookmark the permalink.