Through Transpadene Gaul by Rail

Posted on August 2, 2015 by Uncomely and Broken

I was on my way to Lausanne from Milan by train, and instead of reading the book I had with me, decided to look on the window instead. There’s not too much to see at first.  The trainyard isn’t all that pretty though it does have an old-fashioned industrial charm–the large old arched switch station in the trainyard has a sort of classical feel about it, to my mind. But from here I am leaving the Romans behind and heading into Transpadene Gaul. 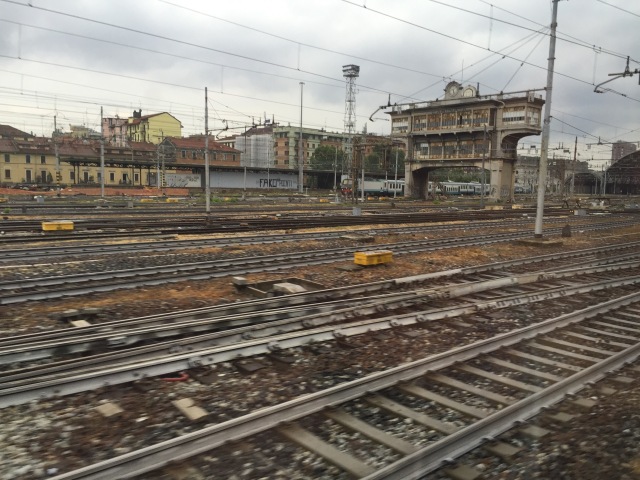 It was a gray day, and not so far out of Milan I promptly fell asleep. I woke up as we hurtled through a station, though I don’t know which one it was. 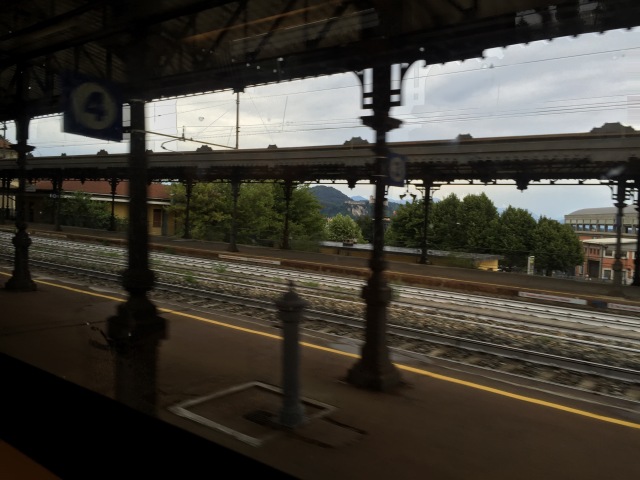 A hour or so later, we begin to see the Lago Maggiore, one of Italy’s great northern lakes. 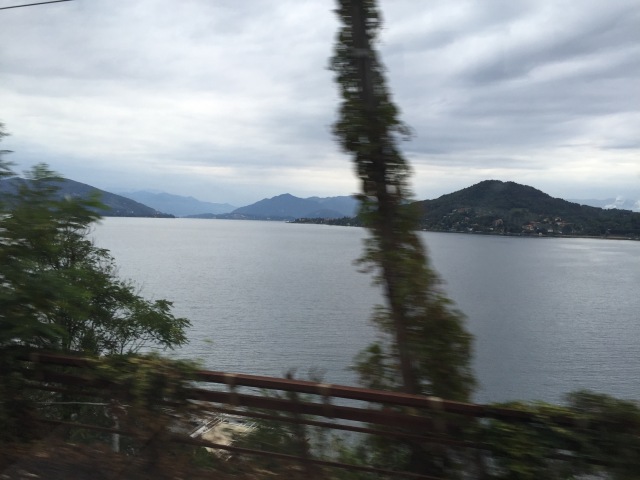 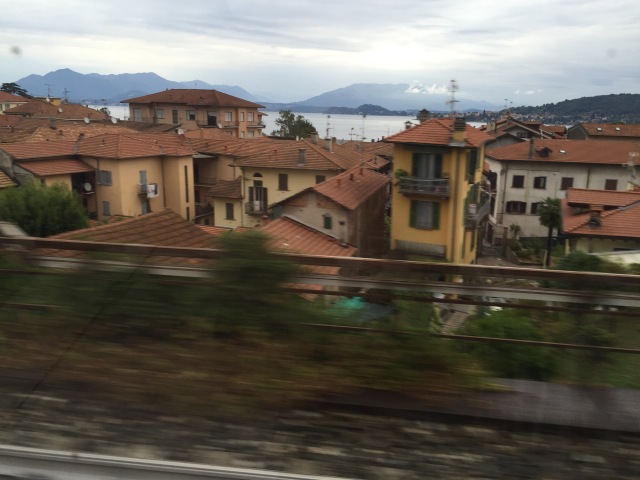 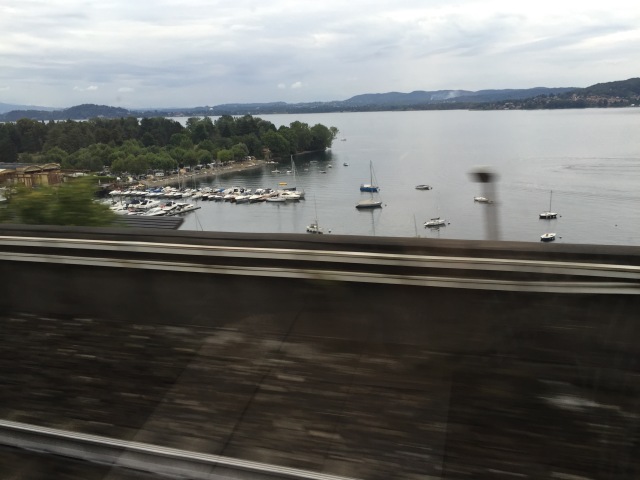 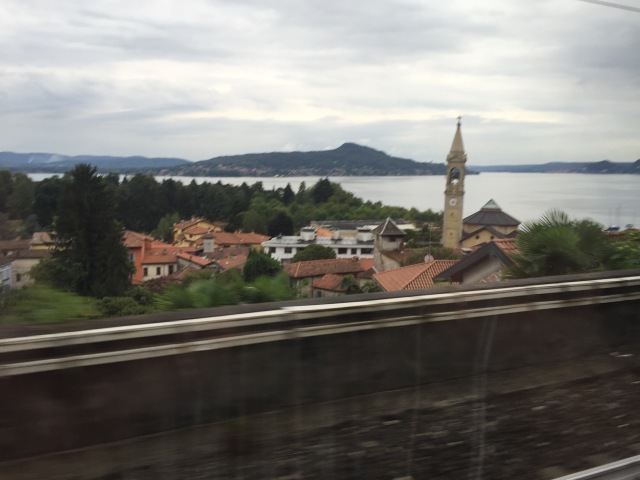 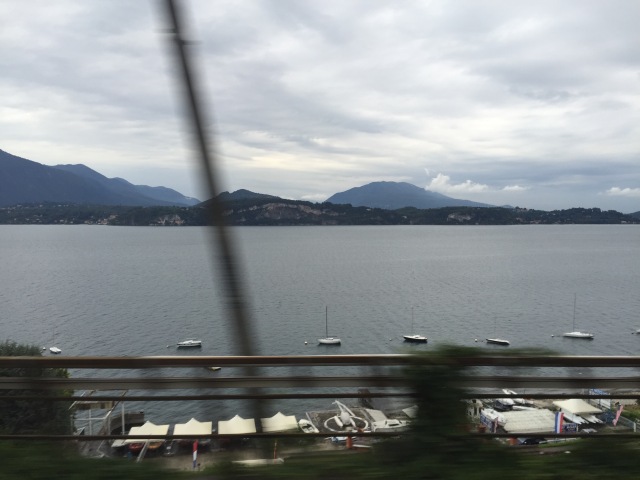 When I think about it, there are two pictures that I regret missing during this part of the journey.  The first was the result of bad planning–I had hoped, in passing along Arona, I might catch a glimpse of the Colossus of San Carlo, the massive hollow bronze statue from the 1600’s that was the inspiration for the Statue of Liberty. For some reason, I thought it would be on the lake to my right, when in fact it was on a hill overlooking the lake to my left. He was a dour old moralist, but I would have liked to see the giant statue of St. Charles Borromeo. I’m sorrier, though, about the little girl, little more than a toddler, waving  frantically to the train from the backporch of an apartment building along the tracks. Eventually the trains will be a routine matter for her, no doubt, but for now she was excited to see one rumble on by. That’s a picture I wish I had.

My regrets were more than made up as further north we got to Stresa and could see the Borromean islands just beyond. 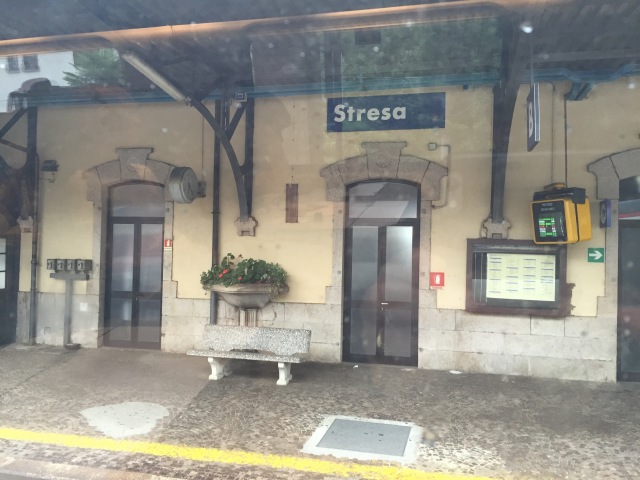 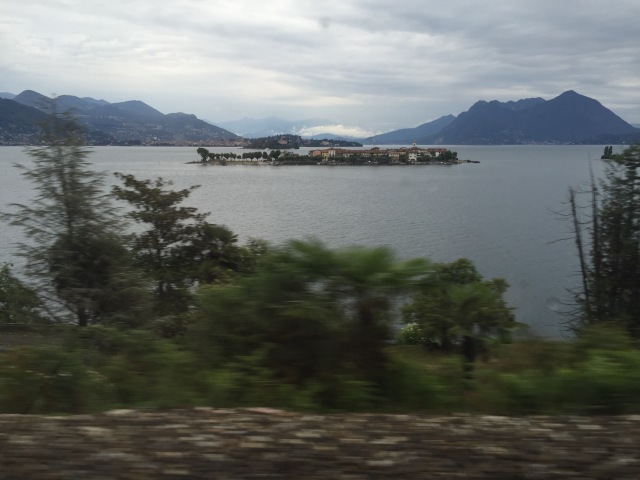 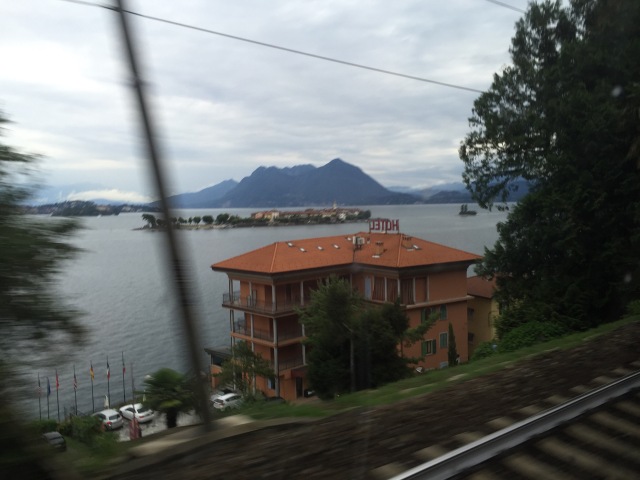 A good part of Hemingway’s A Farewell to Arms is set in a hotel here. After Frederic Henry escapes the carabinieri (spoiler alert!), he comes to Stresa to meet up with Catherine–it’s from here that, in a rowboat in the rain, they flee to Switzerland on the other side.

“You know where to go?”
“Up the lake.”
“You know how far?”
“Past Luino.”
“Past Luino, Cannero, Cannobio, Tranzano. You aren’t in Switzerland until you come to Brissago. You have to pass Monte Tamara.”
“What time is it?” Catherine asked.
“It’s only eleven o’clock,” I said.
“If you row all the time you ought to be there by seven o’clock in the morning.”
“Is it that far?”
“It’s thirty-five kilometres.”
“How should we go? In this rain we need a compass.”
“No. Row to Isola Bella. Then on the other side of Isola Madre go with the wind. The wind will take you to Pallanza. You will see the lights. Then go up the shore.”

From the Rock Hudson-Jennifer Jones version of A Farewell to Arms, 1957

Eventually, the train leaves the lake behind, and through a narrow path makes its way though the mountainous terrain, more heavily covered with factories. We come to Domodossola, the furthest point north in this part of the country. In the olden days, you had to go over the Alps here via the Simplon Pass. Now you pass through the Simplon Tunnel beneath, with nothing to be seen from the window but the reflection of your trainmates across the aisle. Once through, you emerge in the Swiss town of Brig, where all the signs in the station are auf Deutsch. A new conductor comes aboard and asks for my ticket, first in German, then Italian, then English. I look again in my wallet for the ticket, where I have no more Euros, only francs now. Ciao, Italia! Guten Tag, Schweiz! 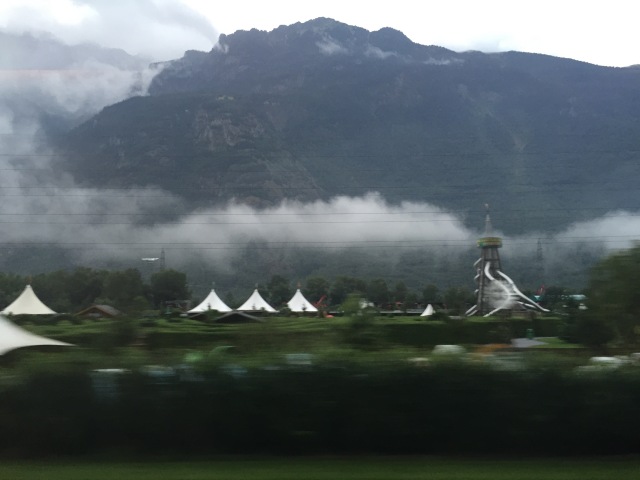 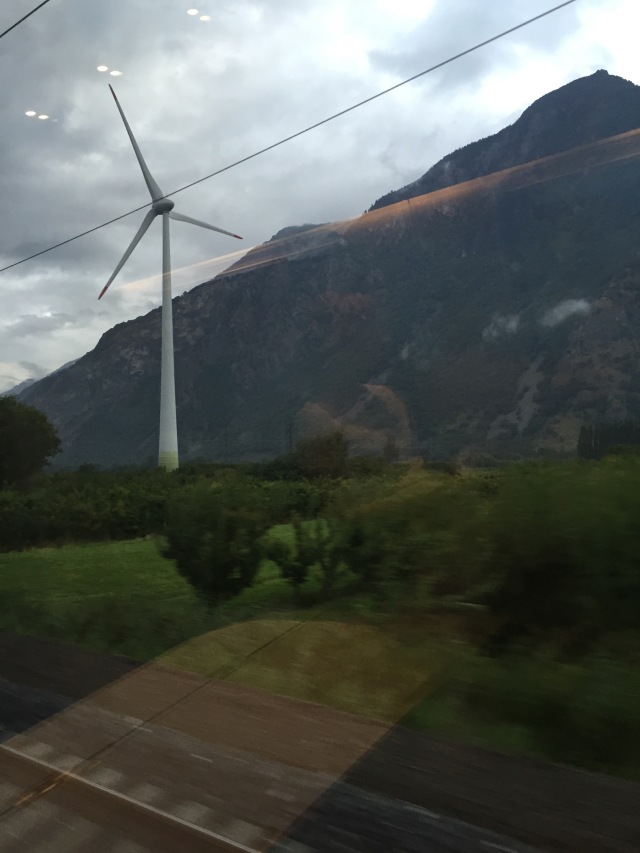 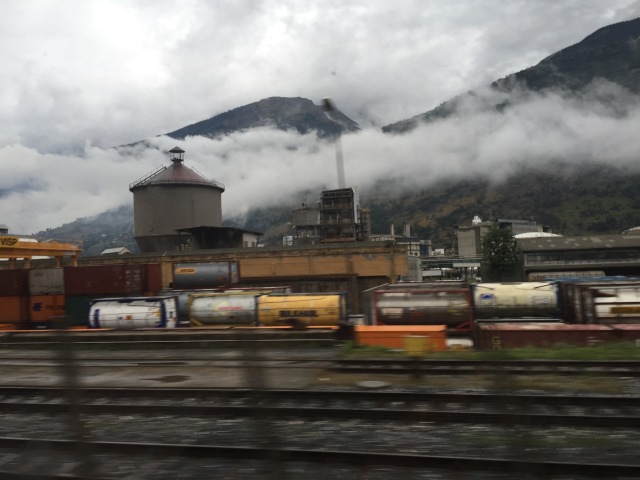 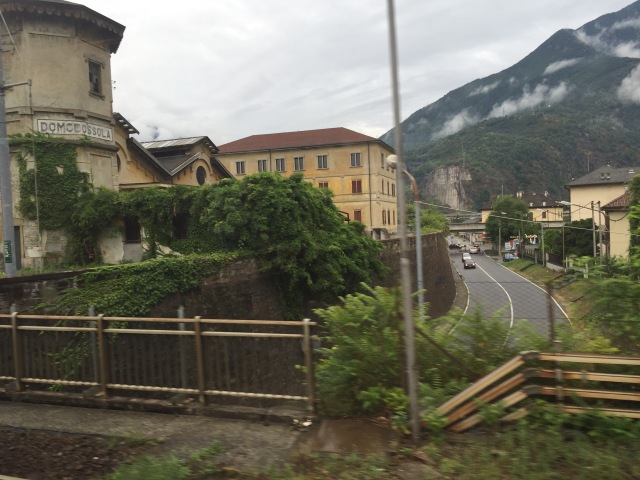 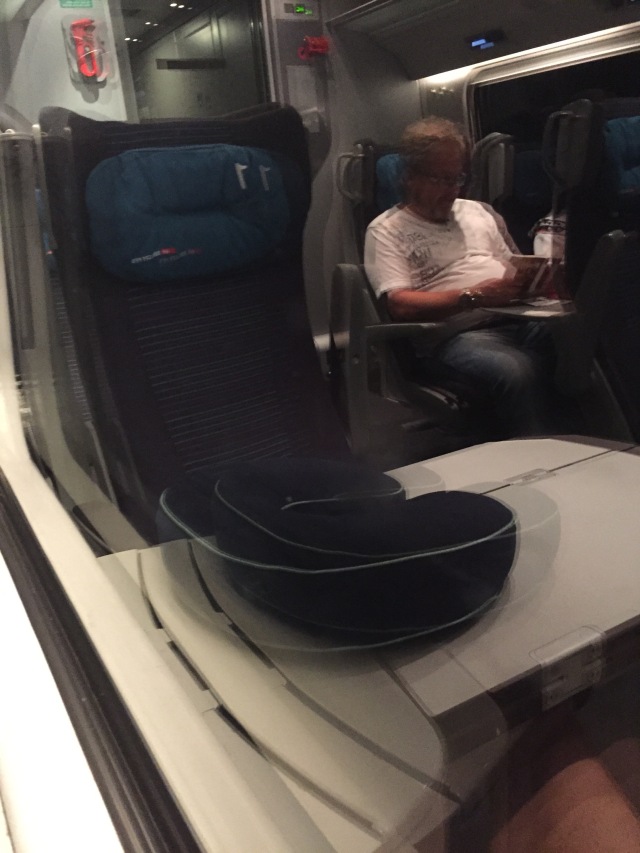 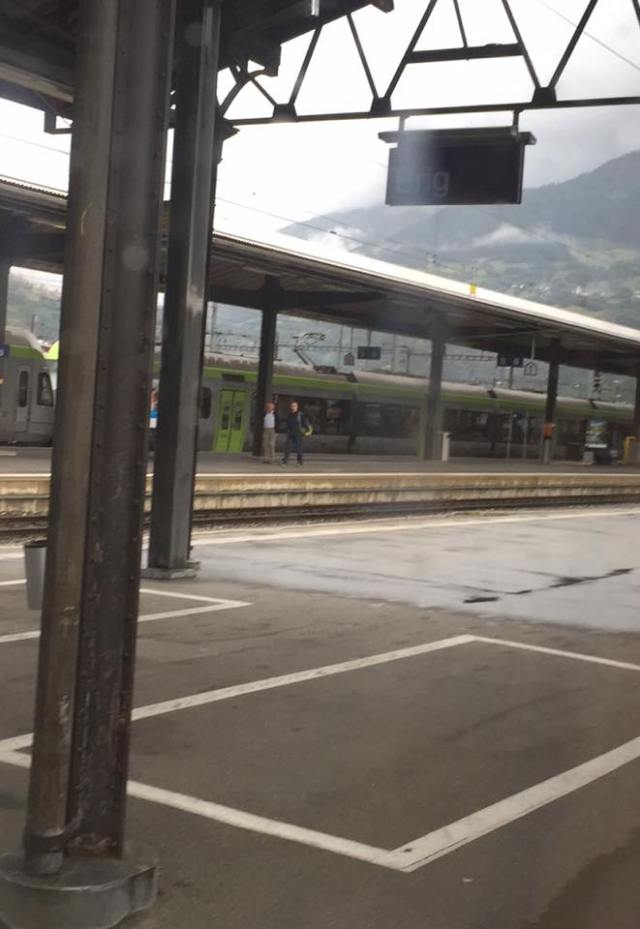 I am a classicist in Sewanee, Tennessee.
View all posts by Uncomely and Broken →
This entry was posted in Italy, Nautical, Saints, Statues & Monuments, Uncategorized. Bookmark the permalink.