The other day I asked my wife whether she had ever used the expression “high hosey,” as in “High hosey the front seat.” It means, in essence, to reserve or “call dibs on” something. Although she grew up in a suburb only twenty miles from my neighborhood, the saying was foreign to her. “It must be a Boston thing,” she said.

In fact, it is a Boston thing, one dating back at least to the 1890’s, according to the Dictionary of Regional American English:

1941 AN&Q 2.120/2 eMA, The child’s word “hosey” (“hozey” or “hozy”) . . has persisted in some parts of the country for more than fifty years, transmitted orally, without “literary” recognition. It is used in the sense of “demand,” “claim,” “choose”—as in “I hosey such-and-such an object.” The child who gets the phrase out first claims and receives the thing in question. . . It was in use in and around Boston half a century ago, and is still current in New England.

While “hosey” has wider application, “high hosey” seems narrowly located within the city of Boston itself, according to a recent regional dialect survey. 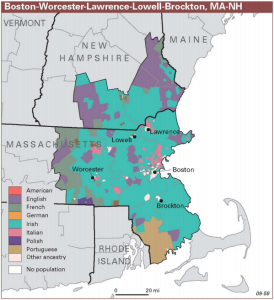 The OED has no entry, but American Heritage suggests the following etymological hypotheses: “[Perhaps from French (je) choisis, (I) choose, first person sing. present of choisir, to choose (from Old French; see CHOICE) or from colloquial English holdsies, word called out to stake a claim (probably from holds, plural of HOLD1 + -IE).].”  The French Canadian derivation is possible but, to my mind, unlikely, as it seems to me that most of that immigrant group is located in the non-high-hoseying north and central Massachusetts areas, not Boston. I’m more inclined toward a variant of “holdsie.”

My recollection is that, if you had said, “High hosey the front seat,” and someone else took it nonetheless, you would say, “Get out! I hoseyed it!” and they would have to acknowledge that you had done so but they didn’t care, or they would leave. Shoving and possibly punching would ensue in the first instance, gloating in the second. High hoseying was not to be messed with. My friend Liz, who’s from Brighton, concurs with all of this on Facebook, where I poste a query. “Once [high hosey] was out there, it was game on. It could not be ignored. A possible response would be ‘you’re not the boss of me.'”

My cousin Mary, who still lives in the area, says kids are still using the expression. She also wonders whether high hoseying was more frequently found among larger families. “Could it be that everyone who commented didn’t have a lot of siblings so they didn’t need share?” Liz agreed with that, and suggested that it was also a matter of affluence. Families with more money, lacking a scarcity-mindedness, perhaps did not give rise to such winner-takes-all competitive strategies as high hoseying.  So often these expressions are studied from a strictly geographical perspective–it would be interesting to look at some of them from a class point of view as well.

I am a classicist in Sewanee, Tennessee.
View all posts by Uncomely and Broken →
This entry was posted in Boston, England, Family, Language & Etymology. Bookmark the permalink.