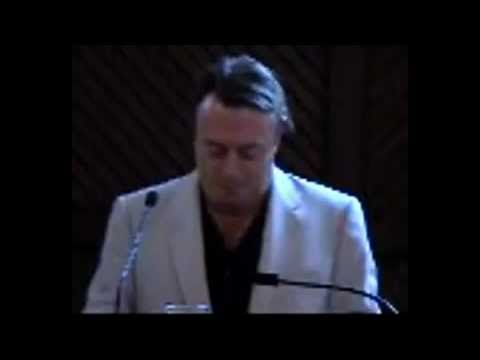 Introduction for Christopher Hitchens,
“The Moral Necessity of Atheism”

I knew that, when we invited Christopher Hitchens to speak, we would draw a large crowd, and sure enough we have, and I am aware, painfully aware, that you all are here to hear him and not me.

Toward that end, let me skip over the elaborate introduction in which Mr. Hitchens’ numerous books and essays would be enumerated at length, to get to the matter at hand, short and sweet. I will not mention Letters to a Young Contrarian, published in 2001, which might be called a guidebook for the gadfly spirit of Socrates, written for the independently-minded person who feels the need to Zag when all the world is Zigging, and which Hitchens wished to call “A Power of Facing,” in reference to George Orwell’s famous quotation about needing to have the power to face unpleasant facts. Since I’m not bringing that up, I won’t mention Hitchens’ incisive volume, Why Orwell Matters (from 2002), nor the very recent introduction he’s written for the new edition of Animal Farm and 1984.

No, not a word on any of that, since, were I to do so, I might give you the wrong impression that Hitchens is simply an Orwell scholar, or enthusiast– which he is, mind you– but since I would be eager to convey to you a fuller sense of who he is and what he writes about, I would be compelled to mention his other literary essays– on Proust in last month’s Atlantic, or John Buchan, in this month’s issue of the same magazine, or the scads upon scads of well-written and thought-provoking reviews in The New York Review of Books, the Times Book Review, and so forth.

And then, to disabuse of the notion that he is merely a literary critic, working in a journalist mode, I woulf have to bring up his book, 2000’s No One Left to Lie To, Hitchens’ manifesto against the dishonesty and moral bankruptcy of the Clintons; I’d probably have to also bring up his sworn statement before the Impeachment committee that Clinton adviser Sidney Blumenthal had perjured himself in defending the President, an event which earned him the nickname from a fellow columnist at the Nation, “Hitch the Snitch.” And lest anyone get the idea that it’s only Democrats Hitchens skewers, I might then feel the need to describe Hitchens’ book, The Trial of Henry Kissinger, a compelling book and now documentary, in which Hitchens argues that former Secretary of State under Richard Nixon, Henry Kissinger, is a war criminal , whose crimes against humanity deserve to and must be punished according to all international law.

I suppose it would be best not to start down that road, since then you might get the idea that he’s just a political writer, and I might have to discuss The Missionary Position, the controversial, indeed scandalous, polemic against Mother Theresa whom, he observes, provided a moral fig-leaf to brutal tyrants and corporate millionaires by accepting their contributions not for the relief for the poor but for missionary work advocating anti-abortion and anti-birthcontrol policies, the hardcore positions of the Catholic Church. And I suppose that might get us into a discusion of other fundamentalisms, particularly Islamic, on which topic Hitchens took a strong stance in the weeks following September 11th, writing, “…the bombers of Manhattan represent fascism with an Islamic face, and there’s no point in any euphemism about it. What they abominate about ‘the West,’ to put it in a phrase, is not what Western liberals don’t like and can’t defend about their own system, but what they do like about it and must defend: its emancipated women, its scientific inquiry, its separation of religion from state. Loose talk about chickens coming home to roost is the moral eqivalent of the hateful garbage emitted by Falwell and Robertson, and exhibits about the same intellectual content.”

No, I’m not going to get into any of that, thank God (oops! am I allowed to say that?). No, instead, I’m going to keep it short and sweet, and ask all of you to join me in welcoming our speaker for today, Mr. Christopher Hitchens, who will be discussing “The future of an illusion.”

Hard to believe this was ten years ago! See also my remarks on the discussion panel about Hitchens a week before his arrival.

I am a classicist in Sewanee, Tennessee.
View all posts by Uncomely and Broken →
This entry was posted in Astronomical, Bible, England, Mythology, Sewanee. Bookmark the permalink.

3 Responses to Introduction for Christopher Hitchens, “The Moral Necessity of Atheism” (Sewanee, Feb. 2004)