Posted on February 9, 2013 by Uncomely and Broken 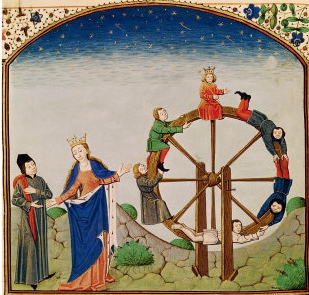 In the Medieval Latin class I’m teaching this term, we’re now reading Boethius’ Consolation of Philosophy. (If you’ve not read it before, stop wasting time on-line and read it now.)  The Consolatio is partially written in prose, partially in verse, and offers a genuinely comforting framework within which to view adversity. It was written when Boethius, who had been at the very highest realms of influence, was unjustly imprisoned; not long after he would be mercilessly killed.  I’ve asked my students to try to turn the verse portions into English poetry, and one of them demanded that I do the same.  Talk about a reversal of fortune!  My laughable effort is below, with the original Latin following. It’s not the entirety of the poem, only the first part, and it gets a little free at the end, but I think the Boethian idea of Fortuna’s fickleness comes through.

O Ruler of the astral sphere
at rest on your eternal throne—
To spin the skies and master stars
in motion is your work alone.

As now the Moon, illumined full,
Returns her brother’s sunny beam
And dims the constellations ‘round
Her head, and then herself grows dim.

As Venus who, at evening,
has in the west made cold ascent,
will change her course and, paler now,
arise to meet the sun again.

Another star, at winter’s start,
which looks upon the scattered leaves,
now brings constriction of the light
that lengthens then in summer’s breeze.

You rule the ever-turning year,
arrange for Zephyr to return
the leafy boughs the North Wind stole.
You bloom in spring what summer burns.

Exemption from such firm control
Is granted nothing, not a thing
Escapes its proper placement, in
your government of everything

So why, in all this vast array,
this interwoven universe,
do lives of people like myself
alone not turn back from the worse?

The original Latin (which is given in full here):

I am a classicist in Sewanee, Tennessee.
View all posts by Uncomely and Broken →
This entry was posted in Astronomical, Classics, Poetry. Bookmark the permalink.