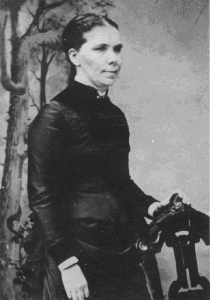 My cousin Theresa recently brought an intriguing story to my attention about my ancestor, Ann Burns (later Byron).  I had already known that she was at one time Ralph Walso Emerson’s cook and had been an important member of the Irish Catholic community in Concord, Mass.  What I had not known was that, during her passage from Ireland to America, she had been briefly the captive of a Confederate privateer!

In the early summer of 1863, a Confederate naval officer named Lt. Charles W. “Savvy” Read was conducting an audacious raiding mission in the waters south of Nova Scotia.  Before he was apprehended, Read would seize or destroy twenty-two U.S. vessels.  Not for nothing was he latter dubbed “the Seawolf of the Confederacy.”  Among the ships Read captured at this time was the Shatemuc, a clipper ship making its maiden voyage across the Atlantic with hundreds of Irish immigrants, among whom was my grandmother’s grandmother, Ann Burns, then eighteen years old.

According to an article published later in the naval magazine, The Rudder, Read’s ship, CSS Tacony, had had a close encounter with a Federal gunboat on the evening of June 23, 1863, about 150 miles east of Portsmouth, NH.  As the article goes on,

“Next morning, in 43° 10′ N., 67° 43′ W., the weather still being thick, with occasional lifting of the fog, a ship was sighted, and on coming up was boarded. She proved to be the Shatemuc, Liverpool for Boston, with 350 immigrants and cargo. Lieutenant Read took charge of her, and remained aboard all day, the Tacony standing by. The Shatemuc carried iron plates (probably for gunboats), and Lieutenant Read for this reason wished to destroy her, if he could secure vessels to take her passengers. None appearing, he bonded the ship for $150,000, and toward night left her.”

Later that day, Read captured a schooner named the Archer, to which he decided to shift command, and set fire to the Tacony.  Hence, while the Union navy continued to search for the rebel ship on the open sea, Read was able to slip past them to enter Portland Harbor.  Nobody there suspected that the fishing vessel was in fact now a Confederate raider, and Read took advantage of the situation to steal a US cutter called the Caleb Cushing.  By the time the authorities had figured out what was going on, the Cushing and Archer were well on their way out to sea.

A swift fleet of Union ships soon gave chase and the incident that followed has been called “The Battle of Portland Harbor,” one of the northernmost encounters of the Civil War.  “Savvy” Read was captured and brought back to Maine, but was soon transferred for safekeeping to Fort Warren, on George’s Island in Boston Harbor.  Perhaps it is worth pointing out that, only a few short days beforehand, the Shatemuc had arrived in Boston with its hundreds of Irish immigrants, Ann Burns one among them.

Postscript. According to the passenger manifest record in the Massachusetts Secretary of State’s office, Ann Burns arrived to Boston on July 23, 1863.

I am a classicist in Sewanee, Tennessee.
View all posts by Uncomely and Broken →
This entry was posted in Boston, England, Family, Ireland, Nautical, The South. Bookmark the permalink.