The pyramid of Cestius, built in the first century, is the first thing you see when you get off the bus at Porta San Paolo in Testaccio. Crossing the cobblestone street, you go down the road to the right to the entrance of Rome’s famous Protestant Cemetery, the final resting place since the early 19th century for much of the well-to-do Anglo-American ex-pat community 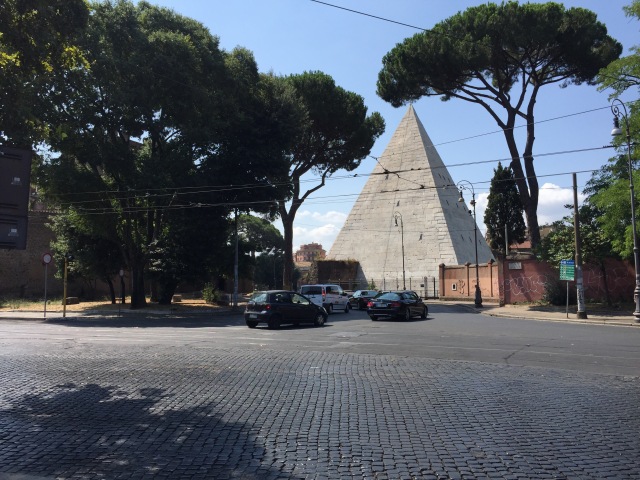 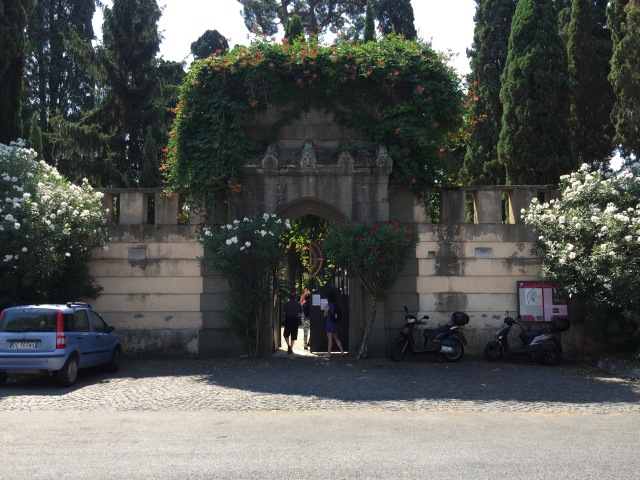 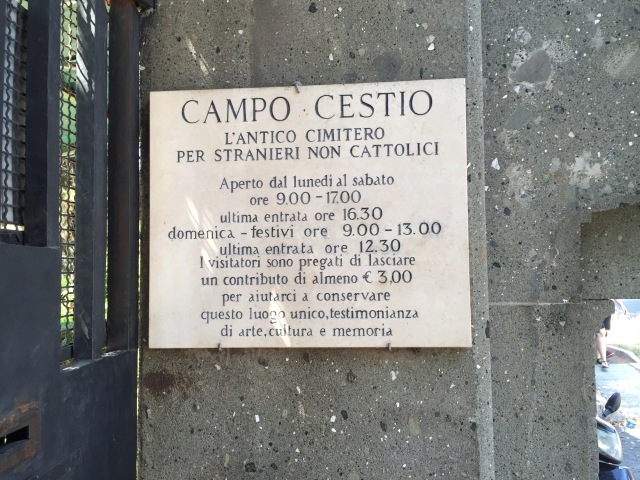 Entering the Campo Cestio is like stepping back in time, though not in the usual way you feel like you’ve stepped back in time in Rome. While it is true that there’s an ancient pyramid lurking to the left throughout your visit to the graveyard, the atmosphere is far more Romantic than Classical. Such a graveyard would not be out of place in England or older parts of the American East Coast–Mt. Auburn in Cambridge, perhaps, or Highgate in London. The sentimentality is thick on the ground here among the maudlin marbles. 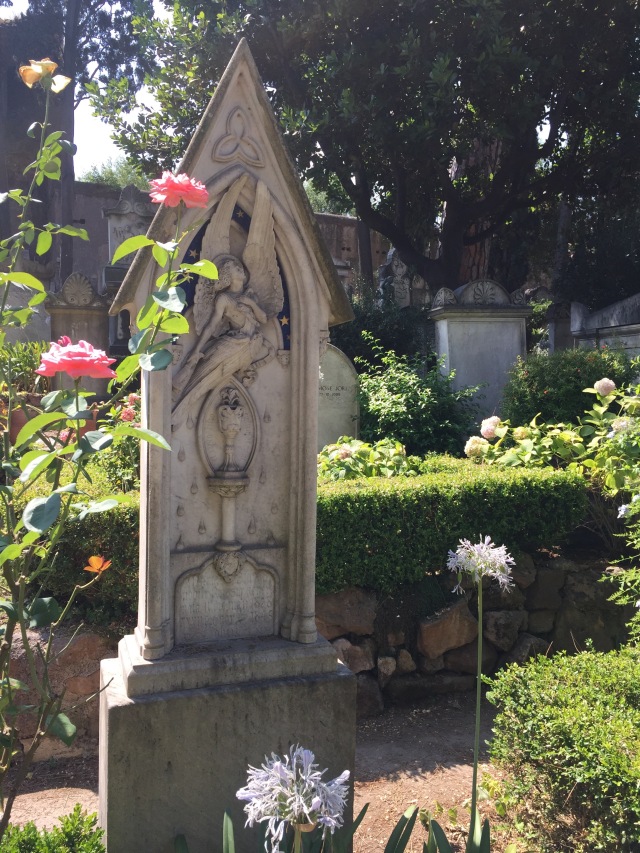 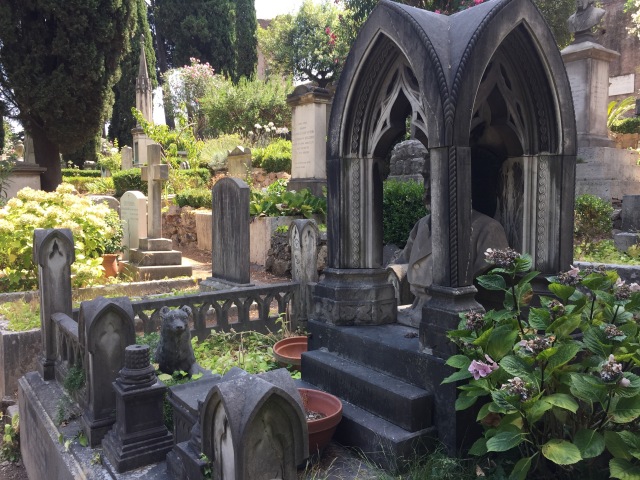 The most famous statue here is  Angel of Grief, which the sculptor William Wetmore Story made in 1894 for himself and his wife. It has been much copied in cemeteries since. 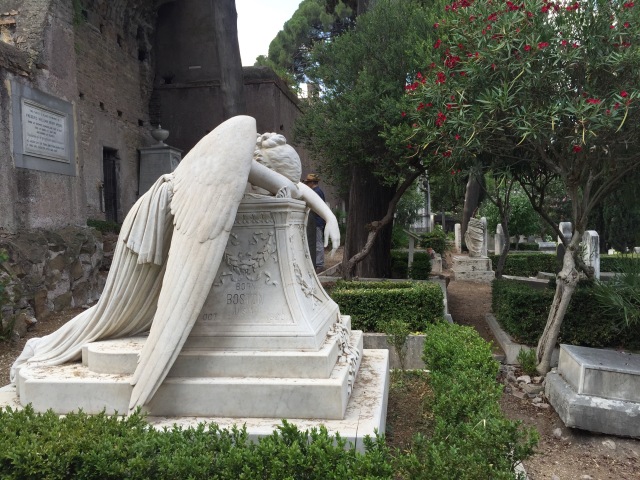 Nearby is the very moving memorial for Rosa Bathurst, who died tragically at the age of 16. She is depicted being received by an angel on one side of the tomb; on the other side, another angel holds an inverted torch and a drooping poppy from which emerges a butterfly, classical images of death and resurrection. 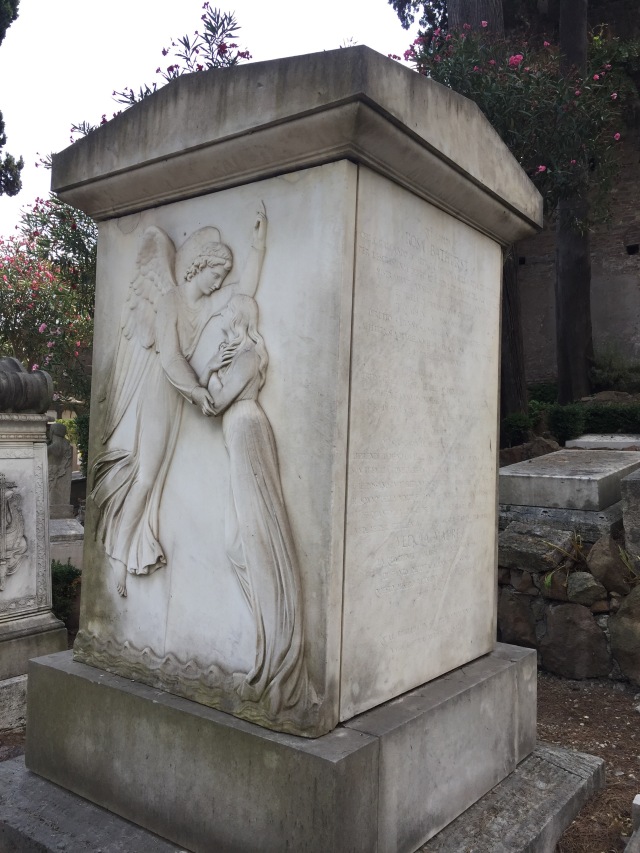 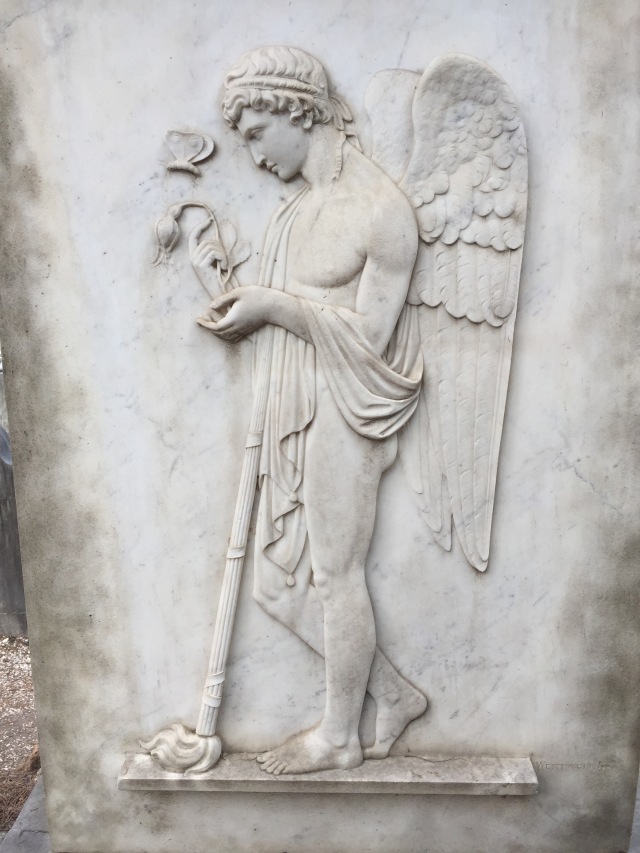 Close to this is the elaborate monument of Thomas Jefferson Page, a Virginian who was, according to his stone, “Captain, U.S.N. and C.S.N., Explorer, Christian Gentleman.” after the Civil War, Page emigrated to Argentina and then to Rome. The sons of Confederate Veterans restored his monument recently, and I sighed a little unhappily at the battle flag they just had to stick there. 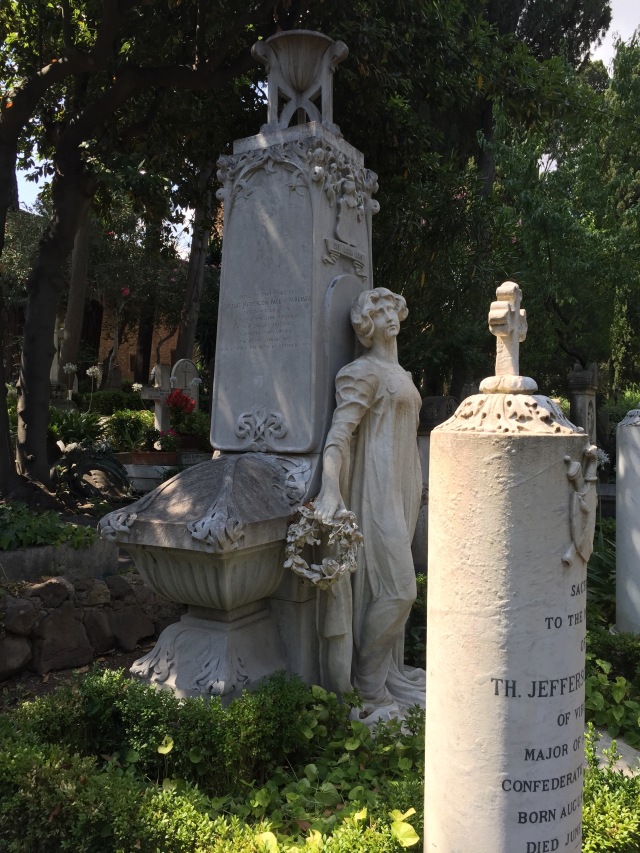 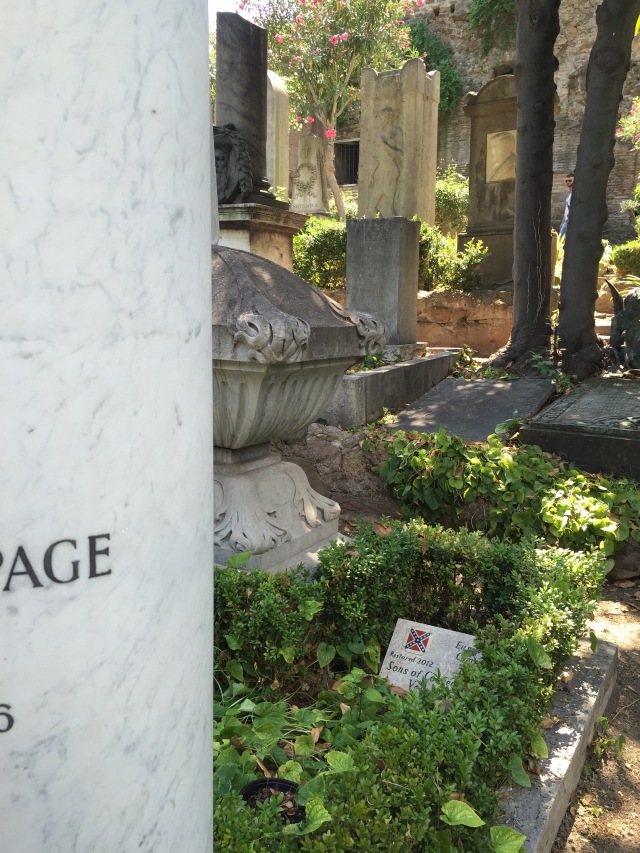 Behind these, alongside the ancient Autelian Wall that Mark’s the Cemetery’s border, is the tomb of Shelley. 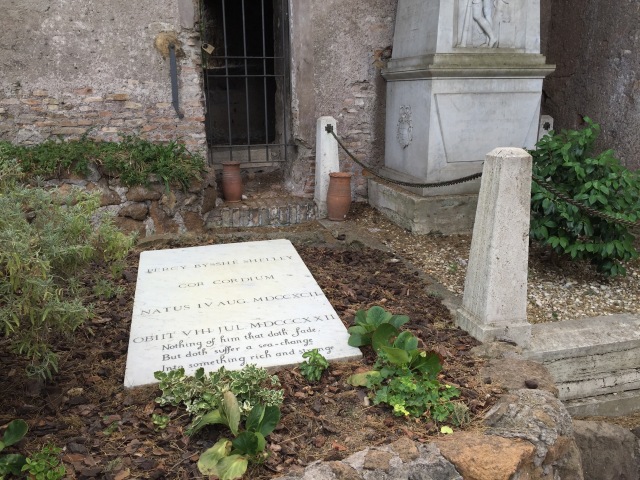 In another part of the graveyard Keats is buried–easy to pick out for all the tourists around it snapping selfies. On the way over, you pass by the famous cat sanctuary, I Gatti Della Piramide, whose website gives a good overview of the shelter’s activities. There’s something pleasing about seeing all these cats, little living images of Bast and Sekhmet roaming at will at the foot of the Pyramid and occasionally leaping up to lounge on the poets’ lugubrious gravestones. Hail to thee, blithe spirits. 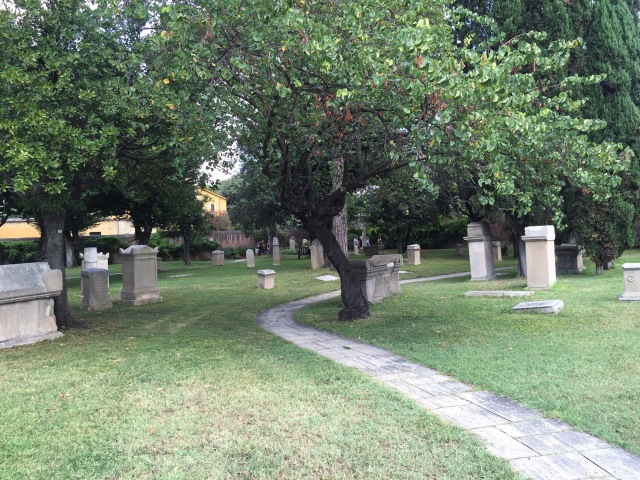 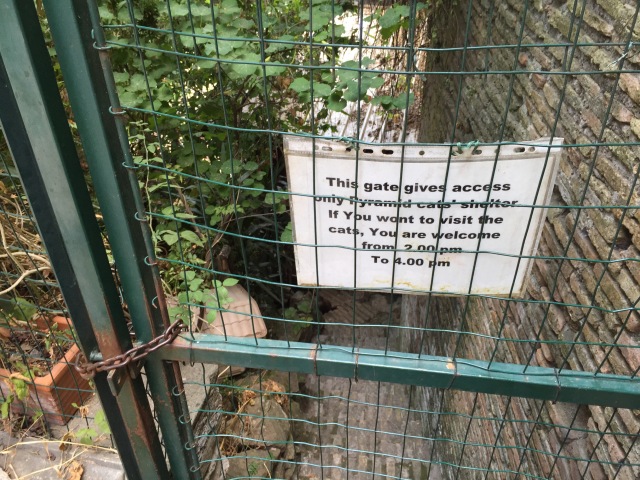 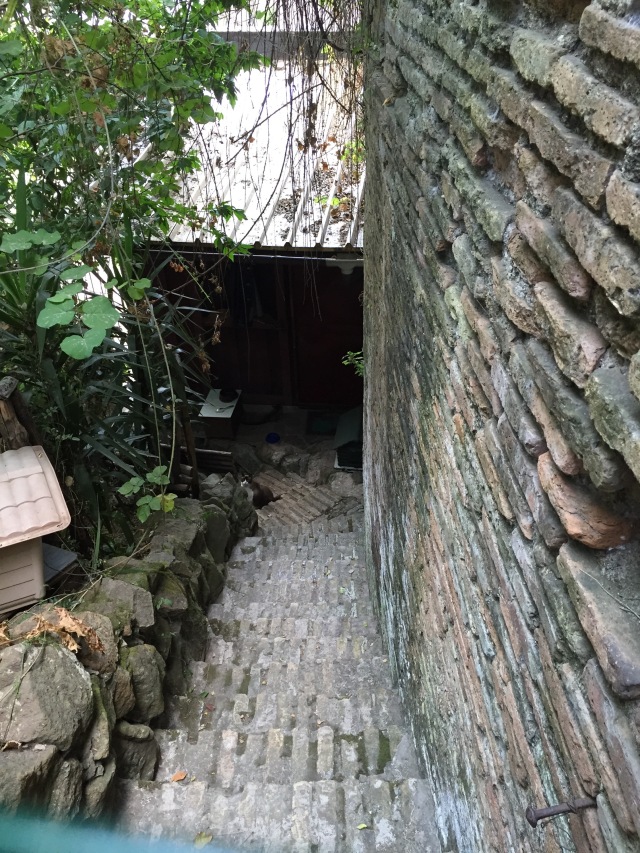 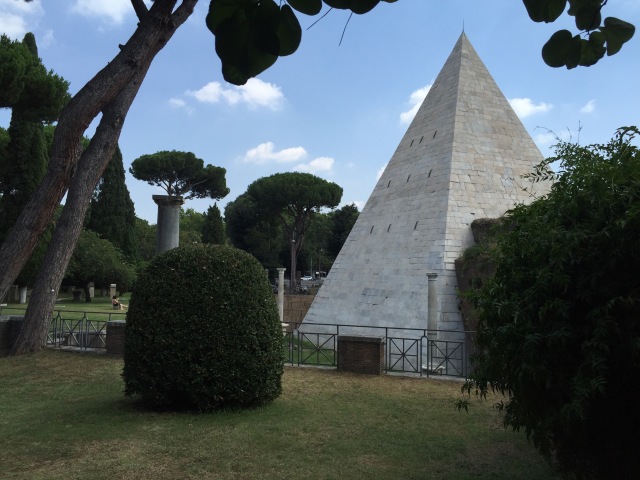 Thomas Hardy, Rome at the Pyramid of Cestius Near the Graves of Shelley and Keats (1887)
Who, then, was Cestius,
And what is he to me? –
Amid thick thoughts and memories multitudinous
One thought alone brings he.

I can recall no word
Of anything he did;
For me he is a man who died and was interred
To leave a pyramid

Whose purpose was exprest
Not with its first design,
Nor till, far down in Time, beside it found their rest
Two countrymen of mine.

Cestius in life, maybe,
Slew, breathed out threatening;
I know not. This I know: in death all silently
He does a kindlier thing,

In beckoning pilgrim feet
With marble finger high
To where, by shadowy wall and history-haunted street,
Those matchless singers lie . . .

–Say, then, he lived and died
That stones which bear his name
Should mark, through Time, where two immortal Shades abide;
It is an ample fame.

I am a classicist in Sewanee, Tennessee.
View all posts by Uncomely and Broken →
This entry was posted in Cemeteries & Funerals, Poetry, Rome, Uncategorized. Bookmark the permalink.

2 Responses to Protestants and Pyramid