A Day on Dimmick

“Believe me, my young friend, there is nothing–absolutely nothing–half so much worth doing as simply messing about in boats.”  Thus says Rat to Mole in The Wind in the Willows, a favorite book of mine, as some will know. And so it was this weekend we got some canoes, some kids, and the key to Lake Dimmick and got ourselves out onto the water.

According to the Sewanee Messenger, Lake Dimmick is the largest of the lakes on the Domain, occupying 80 acres, about ten times the size of Lake Cheston. Originally named for Clarence Day, who donated most of the property, the lake was rechristened to honor the Rt. Rev. William Arthur Dimmick, at Day’s request. As you make your way from the dock, you can see the dam that’s responsible for creating the lake in 1971. Together with Lakes O’Donnell and Jackson, Dimmick is a critical part of Sewanee’s water supply.

Occasionally other dams show up on the lake, the work of industrious beavers, whose activities cause trouble by blocking the spillway and consequently eroding the base of the man-made dam.  It has been the case in the last few years that the USDA has had to come out to conduct a beaver cull to control the population with traps and snares. “Isn’t that a beaver dam over there?” I asked, looking up from the dock. “It’s a beaver lodge,” my son said, and tolerantly explained to me the difference.  Empowered with this new knowledge, I suggested we to paddle on over to investigate.

Alas, no beavers appeared to be at home. I like to think they were out on a weekend holiday of their own.

In 2005, all the talk about this lake concerned real estate development.  The University Regents had commissioned a study to investigate “the feasibility of creating a residential development with the possibility of an 18-hole golf course and/or small conference center.”  The hope was to lure investment to the Domain, not an entirely terrible goal, I guess, but the reaction on campus was universal horror. Full-scale protests helped to dissuade the powers-that-be, as then they were, from moving ahead with the project.

“Imagine if the Regents hadn’t listened to the protesters,” my friend said as we headed back. “Just picture what would have happened if they’d gone ahead and decided to put in a huge development with all these million-dollar homes, just in time for the real estate crash of 2008.  Think of this place surrounded by bunches of foreclosed-on McMansions. What a disaster that would have been.”

I thought about it, with a little shudder, and looked back at the empty beaver lodge.  “Beyond the Wild Wood comes the Wide World,” the Rat tells Mole, while they row along. “And that’s something that doesn’t matter, either to you or me. I’ve never been there, and I’m never going, nor you either, if you’ve got any sense at all. Don’t ever refer to it again, please. Now then! Here’s our backwater at last, where we’re going to lunch.” 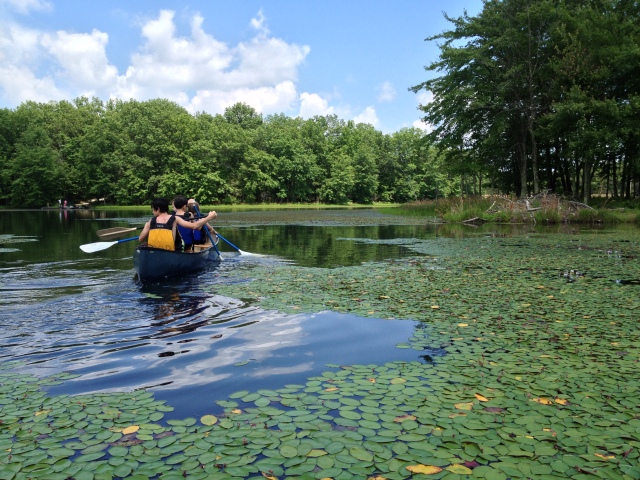 I am a classicist in Sewanee, Tennessee.
View all posts by Uncomely and Broken →
This entry was posted in Animals, Family, Nautical, Sewanee, Sports & Games, Tennessee, Trees & Flowers. Bookmark the permalink.

6 Responses to A Day on Dimmick