A Bear in Sewanee

Posted on September 13, 2012 by Uncomely and Broken

This morning around 4:20am a black bear was seen running toward the dining hall on campus.  Reports of garbage strewn in different areas have also been reported, read a post from the Sewanee police in an e-mail message earlier this week.  There were subsequent posts about the bear, whether precaution ought to be taken (yes), whether it was okay to feed it (no), should children and pets be kept indoors (perhaps), but none of the follow-ups conveyed the same excitement as the original.  There have been no further bear sightings, disappointingly.

Perhaps it’s just that we don’t need to see the bear again.  Animals are good to think, as Levi-Strauss says, and this bear has jostled me into thinking about a number of things:  a myth I’ve long taught and a favorite etymology, a familiar constellation and an Old Master painting I saw this summer, as well as a recent poem about that painting.  It’s a desultory collection of thoughts, and I hope you will (er) bear with me through them.

As Ovid tells the myth in Book 2 of the Metamorphoses, Jupiter became enamored of a lovely young nymph named Callisto, who, as one of the followers of Diana, had made a vow of chastity.  Undeterred by this and further hoping to avoid detection by Juno, protinus induitur faciem cultumque Dianae, “he instantly takes on the face and appearance of Diana,” and as the goddess rapes Callisto. It is the most unusual of Jupiter’s disguises, I think, and that is saying a lot for a god who has made love as a swan, a bull, and a golden shower in order to escape his wife’s detection. Despite Callisto’s attempts to hide her pregnancy, she is found out by Diana.

This discovery is the subject of a large painting by Titian, pictured above, newly acquired by the National Gallery in London for £45M ($71M).  In the painting, you can see the angry virgin goddess pointing an accusing finger at Callisto’s belly, while all the nymphs turn dramatically away. It is fair to say that the display of this painting, together with two other Ovid-inspired Titians, was the biggest thing going on in London this summer after the Olympics.  The National Gallery pulled out all the stops to celebrate the exhibition by commissioning a new opera, as well as a series of installations and poems to go along with the display. (I have thoughts on the contemporary artwork which I will discuss more fully soon).

Exiled from Diana’s company, Callisto gave birth to a son named Arcas, but even so was not protected from Juno’s later vengeance.  “I will take that lovely form from you,” Juno declared, and then, as Ovid writes,

Pulling her hair over her forehead, she pushed her face down onto the ground.  The girl extended her arms in supplication, arms that began to grow bristly over hands that curved into claws and started acting as feet.  The face once praised by Jupiter grew misshapen with a jutting jaw … and from her rough throat came a hostile, angry, terrifying growl.  Her mind remained as before, but she had taken on a bear’s form. With incessant groans, she lifted her hands (such as they were) to the starry heavens, wordlessly complaining against the impassive chief god.

And it gets worse for the poor girl, of course.  Her son, Arcas, has become a hunter, and one day comes across his mother in her unfortunate transformed state. But before he can unleash his spear against her, Jupiter takes pity. 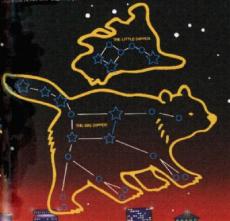 And hence Ursa Major and Ursa Minor , the Big and Little Bears, remain in the sky, always where Jupiter and Juno can keep on eye on them, though they do so perhaps for different reasons.  One of the new poems sponsored by the National Gallery is about the myth of Callisto by Jo Sharpcott.  I haven’t typed it out, but you should listen to her read it, as it’s really very good, and addresses the question of what it feels like to be catasterized.

The skies gained two new constellations, and the land from which they were snatched took their names, since Arcas is the Greek word for “bear.”  Despite the tragic story, Arcadia has ever been a byword for a locus amoenus, a lovely pastoral place, where the world with all its bother never intrudes.  Sewanee was so styled in William Alexander Percy’s Lanterns on the Levee, a beautifully-written memoir of a Southern gentleman from 1941.  Of his alma mater Sewanee, he wrote, in a passage well-known in these parts, 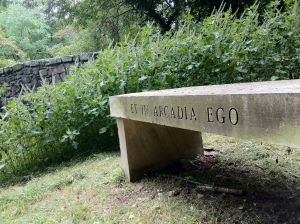 It’s a long way away, even from Chattanooga, in the middle of woods, on top of a bastion of mountains crenelated with blue coves. It is so beautiful that people who have been there always, one way or another, come back. For such as can detect apple green in an evening sky, it is Arcadia — not the one that never used to be, but the one that many people always live in; only this one can be shared.

I like to think the black bear was remembering Percy’s passage while strewing garbage about the quad.

I am a classicist in Sewanee, Tennessee.
View all posts by Uncomely and Broken →
This entry was posted in Astronomical, Classics, England, Language & Etymology, Mythology, Poetry, Sewanee. Bookmark the permalink.

7 Responses to A Bear in Sewanee

Leave a Reply to Uncomely and Broken Cancel reply