“If Greece leaves the euro, the most likely interim currency is the existing euro overprinted with a Greek delta symbol (for ‘drachma’), or possibly with a corner clipped.”  So speculated yesterday’s Independent.  The intentional defacing, or rather “re-facing,” of currency is not new.  In ancient Greece, states would often “overstrike” the coinage of another so as to make a claim on it.

The reasons for overstriking were numerous.  It might be intended to restrict export of the currency and so keep it in the local economy.  It might also help to raise revenue in a cash-strapped state, or to devalue a currency for the purpose of improving rates of exchange.  And, of course, overstriking also could make a powerful political statement. 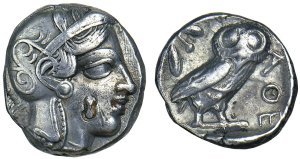 To the side is a fifth-century Athenian tetradrachm found in Egypt. (You will recognize the owl on the reverse as the model for the reverse of the Greek-issued one-euro coin above)  What’s interesting is the symbol on Athena’s cheek on the heads-side of the coin.  It is a “countermark” of the hieroglyph nefer, meaning “good” or “beautiful.”   In the period preceding the establishment of Ptolemaic rule in Egypt, Athenian tetradrachms and their imitations were the only recognized form of money.  The Egyptian authorities had “recoined” this tetradrachm to validate it as legal tender in their state.  Such coins go for great amounts at auction now.

It could take weeks for the Greek government to produce a new drachma if they, in fact, exit the Eurozone in the chaotic fashion that is apparently in the offing.  The provisional coin of the realm, then, will probably be some sort of “drachmatized” Euro.  While these would lose at least half their value at the moment of official overstriking, future collectors no doubt would pay a lot for them.

I am a classicist in Sewanee, Tennessee.
View all posts by Uncomely and Broken →
This entry was posted in Birds, Classics, Emblems, Numismatics. Bookmark the permalink.